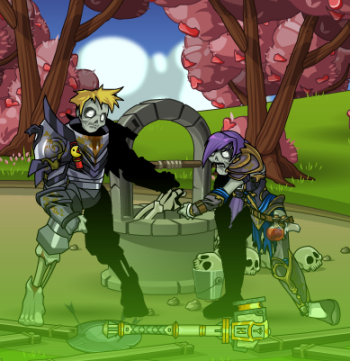 Zombie Rolith: I love you with my whole heart, and give it to you freely!
Zombie Alina: Does that come with a side of your brains, too? Mmmm.

Lesson: Undying love is, surprisingly, not so romantic. Hearts belong inside bodies. For those of you who've been asking, the Rolith/Alina wedding event this October will NOT feature zombies. (Sorry Artix!) It WILL feature an Eternal Flame, though, so that's pretty close to undying, right?

You guys are AMAZING! Reens and Stratos have received over 1,000 applications to join the in-game moderator team! That is a LOT of emails to read through. We really appreciate how many of you want to help make AQWorlds a safe and friendly game for your fellow players.

After the end of the day, Reens and Stratos will not be accepting any more applications. This will not be the last time we hunt for new mods, though, so if you aren't old enough to apply, or your application was not accepted, please keep an eye on the Design Notes for the next time we start searching!

The next Chaoz zone begins later this Summer. Many of you have already met the new Chaos Lord, but be warned... he may be slightly different from how he first appeared. What he definitely is, though, is a Chaorrupted Chronomancer, and he feels that it is way past time you knew what you were doing here, and how you came to be.

Some of you might remember that long ago Design Notes* where we revealed how AQWorlds was formed. Galanoth did slay the Dragon of Time, and in this next Chaos zone, we're going to show just HOW that happened!

AdventureQuest, DragonFable, and MechQuest all had a hand in creating who YOU are in AQWorlds, but those Heroes are not you. YOU have a destiny of your own, and you will grow closer to finding out what that really is.

* Scroll down to January 13th/

The Finale of Doomwood Draws Closer!

J6 is busy creating the monsters you'll battle, as Samba slips into an animation trance (it adds +15 to her speed-tweening skill). Artix's script is BEASTLY, and that's not from all of the zombies he's crowded into it. /Cheer Samba on, /equip your sharpest blade, and prepare for... the end of DoomWood!

PS: Daimyo's birthday is this Friday! The Daimyo pet is one of the requirements for the Dark Armored Daimyo and Golden Armored Daimyo pets available in the Necropolis merge shops. Daimyo is only available on his birthday every year, so make sure you get yours on Friday!