Help Them Become Revolver's Album of the Week!

Long-time friend of Artix Entertainment and guest star in AQWorlds, our favorite rock band, One-Eyed Doll, has a chance to be featured as the Album of the Week by Revolve Magazine! If you like OED's music, pick this up. The tracks are seriously fantastic!

But FIRST go vote, because Kimberly and Jason are pretty awesome people and musicians, and they would really appreciate your support. You can vote as many times as you like until Monday, March 30th, at noon. 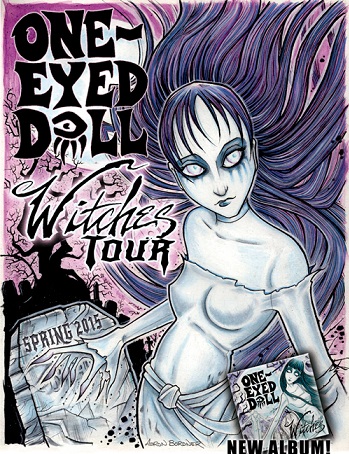 If you don't know who One-Eyed Doll is, then settle in, because it's story time!

The first time the AE team saw Kimberly, she was being escorded into a metal cage between two tesla coils by a mad scientist/muscian named the Arc-attack. A thousand people looked on as bolts of lighting shot at the cage creating computer controlled frequencies that "shockingly" played the themesong of Back to the Future! Kimberly giggled and danced as lightning struck the metal bars creating the music.

That was "normal" compared to watching One-Eyed Doll play live afterwards. She hypnotized the audience with her sweet and kind voice... and lured us to our doom. There was an explosive energy that we had never seen in real life before. After only 2 songs we were informed that they had run out of time and everyone had to leave so the band could clean the room up.

Cysero's friend Alces stirred the crowd into a chant "YOU PLAY, WE'LL CLEAN!" promising that we would clean the room if One-Eyed Doll would play us another set. They agreed and as soon as Kimberly struck the first chord, the mezmerized audience went to work cleaning the floor, stacking chairs and helping Arc Attack take down their musical tesla coils

(Cysero proudly brags: I got shocked by the one that wasn't properly grounded!) That place was spottless before the crowd left at 4am!

Since then, OED has guest starred in several AQWorlds events, Dage created an incredible album cover, and they've helped the AE team wreak havoc in-game and out!