This EPIC Class arrives on Friday!

This Might Be the coolest class yet! Who are we kidding, the Vindicator of They Class is EPIC! With both offensive, stun and lifesteal skills, after you /equip the VoT class, you'll be able to easily up your kill count while collecting rares aplenty!

This class will only be available for a limited amount of time! The They Might Be Giants event will be in-game for a year and then that will go rare, too!

You Might Be Even More Awesome in this class!

The Class can be purchased from Itzachi in Battleon for 2,000 ACs or by merging 90 Tokens of Vindication at the Token Shop in the /collection map. Non-members have a daily quest available which rewards a Token while members can do that quest AND a member-only daily quest which will award a second Token!

A Hero's got to have dexterity to annihilate opponents in combat, and with these cutting-edge skills - and two all-new animations- you'll really be able to let your blade-work shine!

Auto Attack
A basic attack, taught to all adventurers.

Super Taster
Summons a Super Taster to bite your foe, Causing a DoT and slowing enemy for 6 seconds.

We Want  A Rock
Petrify your opponent for 10 seconds but applies a DoT To you.

AQWorlds' titanic 3rd birthday event is happening RIGHT NOW in-game! Log-in and party up with your friends to meet They Might Be Giants, our special mystery birthday guest, and... The Collector! 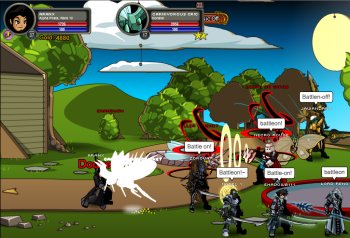 Thanks to Aranx for the action-packed screenshot!

Are you going to let yourself be kidnapped, trapped, and displayed for a race of grotesque, rare-collecting Aliens? I didn't think so! Get in there and Battle On in our biggest birthday event yet!