The Goddess of War needs skilled captains and pilots to BLAST the upstarts in the past, present, and future! Starting Friday night, get the Galactic Captain mount armor, regular armor, and more when you buy any AdventureCoin or Membership package of $10 USD or more. 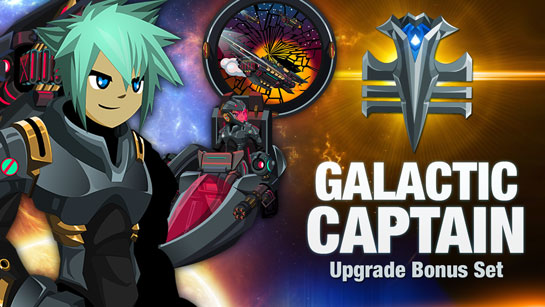 Once you've chosen the Galactic Captain bonus on the Account Manager page, log in and find the set's shop in the Other Achievements tab in your Book of Lore.

Boosts and Doom Tickets will be added directly to your inventory.

Our Upgrade Bonuses Leveled Up... Choose your Reward!

When you buy any AC or membership pack worth $10 USD or more, you'll be able to choose one of the following bonus sets:

If you buy a 12,000 AC or 12 month membership pack, in addition to choosing an upgrade bonus set, you'll also get 7x Game Boosts, a character page badge, plus 10 Wheel of Doom Fortune Tickets (worth 2,000 ACs). 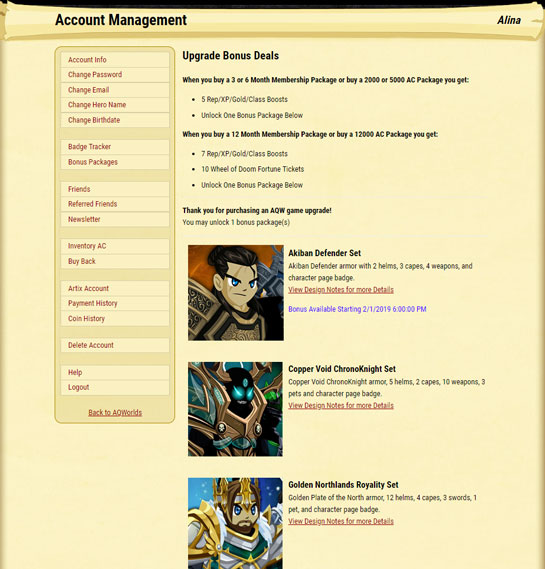 As I talked with many of your fellow AQW players about these changes, one question repeated itself over and over: "why do we need to do this? Why now?"

Development for AQW:Mobile is going to go into overdrive. With AQW:Mobile, we will not be able to do nearly as many rare items (this is in large part for game performance reasons, like managing asset loading, just like in AQ3D). It is also a pretty big blow to the artists and future players to lose access to entire sets of gear every month.

We want to avoid that. We want to keep all the incredible art the team makes available for everyone, no matter when they start playing. And as we move into new platforms (mobile devices, Steam, ... maybe consoles?!) we want to make sure that art is available for the new heroes who will join you.

Upgrade Pack Changes: Why These Changes?

The goal with all these changes is to reward you even more -- to give you guys more options and more choices. (Plus, this new method lets people who upgrade multiple times get multiple rewards.) This is a great improvement for players who want to collect upgrade bonus sets (but may not always have the ability to when they first release).