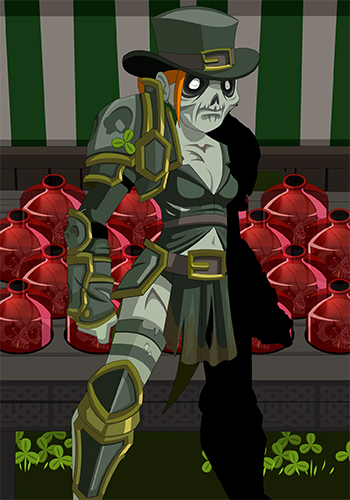 Something Lucky Has Become Unlucky!

Mana regen: regenerate mana in the same way rogues do. Whenever you dodge or crit you willr egain some of your mana. Dodging also gives you some of your HP back.

For Stats and Enhancements: Unlucky Leperchauns are designed to use luck and will benefit from most luck enhancements.

Rank 1: Unluck of the Irish

Although this skill has an element of risk, the positives far outweigh the negatives. Those of you with a keen eye will notice that with the high level of haste this class has, this skill is loopable. You might also notice that your rank 3 skill Luck Reserves can actually negate the 10% damage reduction, or just take your total damage boost up to 30%

This one is unlucky for your foe, not you. It does 125% weapon damage.

This skill gives you what Evolved Leprechaun did not have: a reliable damage dealing move. Although it has no effects, it has a huge damage number from all your other skills influencing it.

You dispel a portion of your bad luck and deal moderate damage, Also applies Stalic for 12 seconds which causes all attacks to do 110% damage, increases Crit Chance and Crit Damage by an additional 7% each. Also reduces all incoming damage by 40% for 6 seconds.

If your other moves have hit you with a little too much bad luck this is how you make it go away. Those of you who know evolved leprechaun well will be familiar with it. It increases your power but also has some damage resistance tagged on so it can counter the negative effects of Unluck of the Irish and Dark Side of the Rainbow.

This increases your haste which means your longer cooldowns don't hurt you as much, and it increases your crit chance which helps with your mana regen.

Rank 5: Dark Side of the Rainbow

Once you unlock this skill, it is the core of your class. It has more dodge power the Evolved Leprechaun, but it also makes you take more damage. Taking 25% more damage in order to increase your dodge by 25% more may not seem like the best trade, but the key lies in your mana regen model. Dodging gives you more Mana and Health, so this does help you deal more damage. Because of your naturally high dodge rate, you won’t be getting hit very often anyway. When you opponents do hit through your dodge, it really will be an unlucky occurrence.

As far as this goes, I think it fits the theme of “unlucky” without being detrimental to the class. The self harm effects don’t seem too harsh and are well worth the risk. Playing the class right can also nullify them. My best advice would be to use your 4th skill whenever possible, as it gives you a lot of power and Mana regen. You might want to watch out when using your attack skills. You don’t want to get your mana too low and be stuck for a while unable to use Dark Side of the Rainbow.

*This is not a Typo. It has been purposefully called “Leperchaun” rather than Leprechaun to better signify that it is zombielike.