Skull Towers of Silver and Gold

Upgrade to unlock the member-only zone and class!

Members: unlock the exclusive Skull Towers of Silver and Gold NOW! Battle to discover the backstory of the Castle Of Bone's "The Butcher" monster, battle to create the Silver and Gold DeathKnight Lord armor sets, and more! 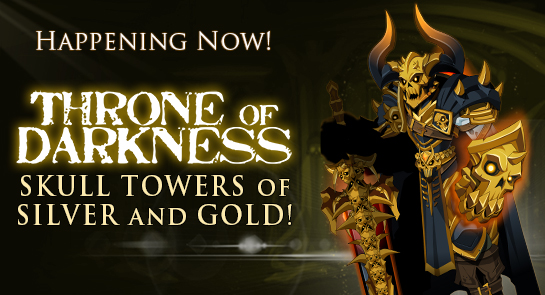 Memet had a BLAST writing and designing this release! Though Artix is the main architect of the Throne of Darkness Saga, Memet (AQW's assistant game lead, artist, and now release designer) is helping him fill out the many quests and areas the Saga contains. PLUS, she is also writing and designing the Saga's member-only and bonus content!

While Artix was writing last week's release, he kept going back and forth choosing a name for what we'd ultimately call "The Butcher" -- before, the monster's name was Chef Ramskull. Memet built this entire character around the idea of what an undead Gordon Ramsay would be/sound like, and could not stop laughing.

Get ready to get battling, members! If you want Vaden's DeathKnight Lord armor, you've got a trek ahead of you!

Once you have all of this... then, oh then, you will be able to intimidate ALL your opponents! 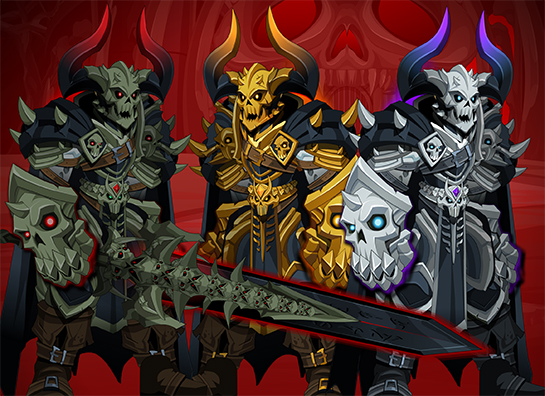 Why a Member-only Zone? Because We <3 our members!

Not so, random hero! Exclusive zones, classes, and other content are our way of thanking AdventureQuest Worlds members -- their support lets us keep AQW free to play for everyone! Without the support of Members, we could not make ANY of AdventureQuest Worlds available... but since we CAN, we've added the Royal DeathKnight armor set to the merge shop in /bonecastle for you to unlock this weekend! The Castle of Bone house is also available for 2000 AdventureCoins!

Not a member but really want the Class or to help support AdventureQuest Worlds? Upgrade your account and unlock this week's Class, zone, and all the other exclusive perks!

TWO of the Artix Entertainment team contributors have had birthdays this week, and we're excited to celebrate them! Eonaleth, one of our web testers, had a birthday earlier this week. You can find her King Altemog pet in the April Rares shop in your game menu!

Tendou, an AQW quest designer, tester, Forum ArchKnight, and HUGE Nulgath fan also had a birthday this week! Talk to Skew in /tercessuinotlim to begin the Eternal Rest quest! You'll get the Void Avenger Scythe AND 5 Blood Gems as your prize!

PS: the Lore Day event (aka Earth Day) has been moved to next week. The event maps and seasonal gear will return then!