We've got a boatload planned for this year's Talk Like a Pirate Day event, and art (and teasers) are starting to come in! We won't spoil the event for you yet. Instead, I leave you with 5 words -- Skypirates. Dragons. Kaiju. Naval battle. (And all the farmable rewards that go along with the event... ok, 15 words.)

We know one of the most anticipated shops of the year is the Talk Like a Pirate Day Quibble shop, and this year our artists have outdone themselves! There were so many great ideas, and so many requests for colors and styles that not even a warship would be able to carry all of them! So here's what we're going to do!

We've locked in plans for 2 of the 3 Naval Commander themes (a 4th may happen... if the sea gods are with us) and a Pirate Captain. Those are:

Get the Dragonborn Naval Commander gear (2 versions show below) or any of the other Naval Commander armors and accessories listed above from Quibble's shop just like always. 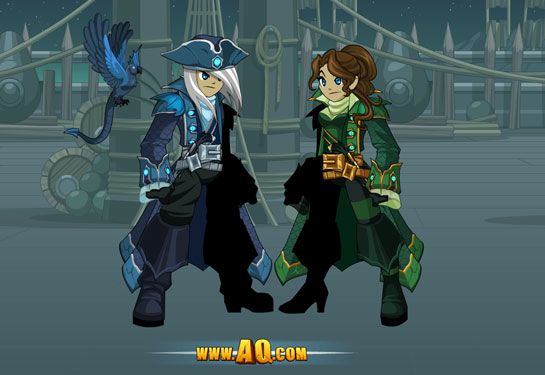 So we're introducing a new way for you to get full Naval Commander sets. Just like how we sell entire sets of gear for one price in our Limited Quantity Shops, this Talk Like a Pirate Day, you'll be able to buy an entire set of gear (with a sweet discount for getting it all at once).

Dragon Chests of Many Colors

Because dragons come in many colors and species, so will the DragonBorn Naval Commander! Talk to Quibble to unlock color-specific Dragon Treasure chests with either the red, orange, gold, green, blue, purple, brown, black, white, crystal, shadow, or pink Dragonborn Naval Commander sets.

If you're the one Dragon King to rule them all... we've got you covered! The Dragon King Treasure Chest contains over 120+ items (all the gear from the 12 variant sets above, plus an exclusive bank pet and bonuses).

This is a BOATLOAD of loot, but for you collectors (and would-be dragon rulers) out there, the dragon-themed treasure will overflow!

Note: yesterday's post was updated to adjust shop options and clear up confusion about what comes in each different set.

* The treasure chests cannot be sold.