Take on the Living Dungeon Tonight!

Tonight! Friday night (est) is the opening of the living dungeon "Titan Hollow" in www.AQ.com I was really grateful to be able to work on this for you with J6, Reens, Ghost and the rest of the AQWorlds team! Like my previous adventure, Dreadspace, it is reasonably sized for casual gamers to enjoy, but has lots of end game and bonus content to do for ultra dedicated gamers who want more. If I only get to tell you one thing about this new mini-story... is that it is beautifully creepy with a really fun feel good ending. When you see the quality of J6's art and Ghost's amazing animated cutscenes... you will see why we needed those extra 3 days!

Without spoiling anything... there is one particular view when you are standing inside of the standing Titan's mouth, looking out... and you can see everything! It is amazing. I think I stared at that scene for hours while I was writing the pun filled quest descriptions. We really need to turn that into a house. 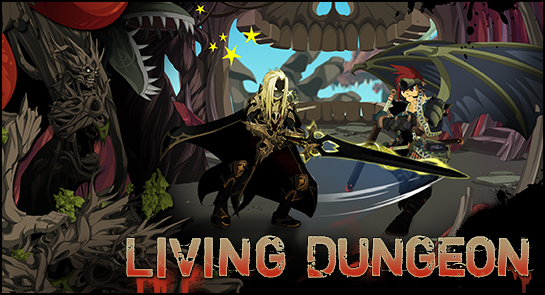 A little backstory. Originally, I was designing this dungeon to be am ultra evil Grimskull puzzle-dungeon... with a "Surprise! It is Grimskull!" reveal at some point. (Which I *STILL* will do one day in the future!) But for this particular summer release we all wanted something that everyone would actually enjoy. Because, um, there is something about dying in terrible and horrible ways... in every room.. multiple times... over and over... that not everyone enjoys. <_< So I carefully placed my evil Grimskull notebook back on the shelf... where it can sit generating nightmares until it is time. Instead,in this release I wanted to focus on the "Parkour of Video Game travel." That is... making getting from point A to point B really interesting. A living dungeon is the perfect place to do that! What started as quick little 5 second cutscenes turned into a pretty full blown production. We came up with he idea for the the end of the adventure while we were still working on it... which I REALLY think you are going to enjoy.

There are two things we did differently in Titan Hollow. First, is how we introduce the villain. As weird and simple as it seems when you play it... it is the first time we have EVER done that. It gives a very clear goal and motivation to get to the end of the dungeon too. Second, you can "re-run" this dungeon. Normally, you beat a quest chain and then farm the boss monster for Drops. In this dungeon, you will re-run the quests to fight the main boss for a single epic prize. To get another epic prize, you re-run a simplier version of the quests again. Of course, there are also some bonus big monster baddies that are there to farm for stuff too.

Release Checklist! Make sure you find/complete/watch:

Again, I really hope you enjoy this adventure. Take lots of screenshots!

P.S. Sorry for writing you a novel! It is 2am... after working on a release like this, I get super hyperactive. I probably will not be able to sleep until you play it. Thankfully we are mostly done now... almost everything is assembled!