Throne of Darkness: The Time War

Portals have opened up all over Battleon, and mysterious beasts are pouring out! Kairos, the High Chronolord, has arrived from the future to aid you in driving these scavengers from the timestream BACK to where they came from. It's time to get your Battle On! 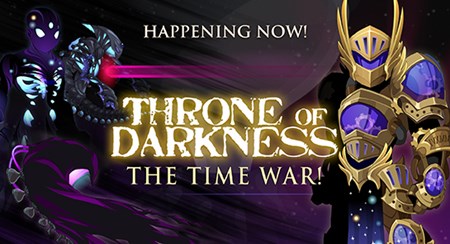 We've been getting a TON of great feedback on the Throne of Darkness Saga, and I'm really glad to hear everyone's enjoying it! This week's Time War is a bit of a prologue for next week's "Xeven's Story," which was originally slated to release this week. In order to get her story JUST RIGHT, though, Artix needed more time. And time is exactly what we gave him!

You'll see Kairos next week, as well as the Time Wraiths... and the warning remains - BEWARE PORTALS!

Kairos the High Chronolord is scrying into the future to show you what is to come in this war. Use his guidance to drive you onwards!

What a crazy, crazy week it's been! We've got a LOT for you to do this week! In addition to all THOSE things, the Earth Day event has returned! /join pollution to begin our annual Earth Day celebration!