Flaming carnage, fiery death, and massive magma-based mayhem! All contained in a raging, roaring volcano! And THAT is where you wake up, Hero! This mysterious 'mancer is not taking any chances with you, not when you've caused so much trouble in the past. 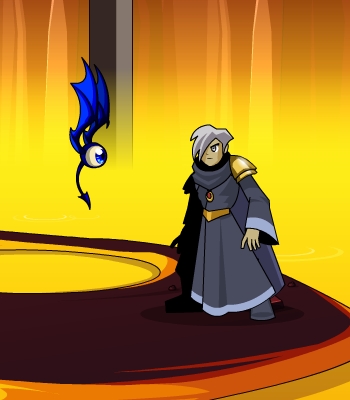 Luckily, Warlic and Jimmy the Eye will be on-hand to assist you.

What is it with villains and impractical hideouts? I mean, really, wouldn't a well-guarded fortress be more suitable for plotting world domination? But noooo, this villainous violator of the peace has plans for you, Hero, and it's up to you to evade them. Otherwise, you'll be roasted, toasted, and burnt to a crisp!

Prepare to battle through an inferno of furious fire minions as you make your way to the top of this incendiary site! This release is the lead-in to a larger story which we will

More Epic Items and Equips for you!

We are racing to get everything ready so that we can roll AQWorlds live from our panel at Dragon*Con on Friday. Although Yorumi will be at the Lab Friday to make sure the servers don't explode, Cysero, me, Samba, and many other AE staff members will be onhand to help launch another awesome AQWorlds release!

If you're going to Con (or wish you were), then check out Cysero's Guide to DragonCon!

And speaking of AWESOME releases... Pony vs Pony will go LIVE! At the Panel! On Friday! Everyone has been working on Pony vs Pony this week to make sure there's enough content for you to saddle up in style. Not sure what we're talking about? Check this page out! (Make sure you have your music turned on.)

We will also be making some other announcements, will ask you what YOU think we should do in DragonFable's Chapter 2, play some games, watch some (awful) videos, and have an epicly awesome, con-crashing good time!