The Solaris and Lunaris Clans Await!

Shoot for the stars! Light and Darkness dominate the skies in an eternal clash for supremacy... and immensely-powerful artifacts! 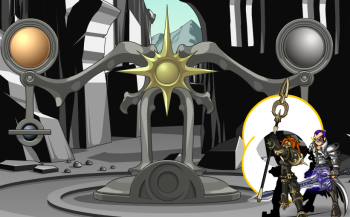 Solaris and Lunaris Call to You!

This weekend, return to the /Mobius map in Chiral Valley and speak to either Saa'thel or Traveon. Ally with either the Lunaris or Solaris clans and, with your help, one side may finally gain the ability to control the stars... and Lore itself!

Speak with Yulgar to view our all-new Suggestion items! We take your designs and put them in-game for ALL your friends to /equip! Because we've put so many of your ideas into AQW, the Suggestion Shop is overloaded! 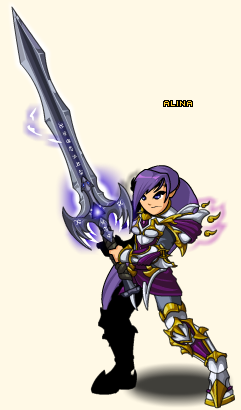 We've got a POWERFUL fix to the power gem problem! Talk to Twilly in Battleon (you'll find him on top of the gem-stack) once a week to get 1 Power Gem added straight into your inventory. You MUST have a confirmed email to get a Power Gem. 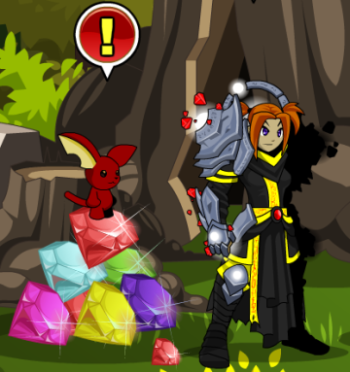 The Power Gem link will ALSO be included in the newsletter emails, but if you do not receive an email for any reason, you can talk to Twilly in-game to get your Gem. You cannot get more than 1 Gem a week, so if you get it through your newsletter, you cannot get a 2nd from Twilly.

To confirm your email and begin receiving 1 FREE Power Gem each week, go here: Account Manager!
If you see two stacks of Power Gem in your inventory, we will fix that next week. 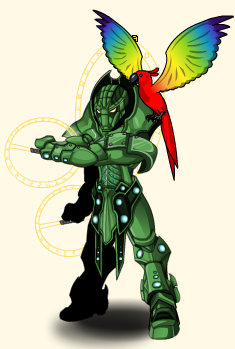 Aproveitem os raros épicos! There are some awesome new Brasil-themed items as well as all of the items from last year!

* One of our Brasilian mods, Colosso (formerly Daimyo), requested we put his personal set into the shop this year. Obrigado, Colosso!

DOUBLE Ballyhoo Rewards for US Players!

Now through September 16th, if you live in the United States, when you visit Ballyhoo and watch our How To Train Your Dragon ad, receive DOUBLE the usual rewards! As long as you see the HTTYD video and background skin, you'll receive 1,000 gold OR a chance to gain 7 Adventure Coins! Just /join battleontown to view Ballyhoo ads up to 10 times a day!

All good Heroes should know the basics of How to Train Your Dragon... and her new ad shows you a great resource to do that! View her ad, then open the Magic Treasure Chest for a chance to gain either 7 free AdventureCoins OR 1,000 gold!

* If you live outside the US, you can still watch Ballyhoo's regular ads for a chance to get either 500 gold or a few Adventure Coins!

Have a good night, everyone, and enjoy the release!

Field guide to the Good, the Ebil and... Twig?

Moglins are the cuddly* and adorable** mascots of our game. Their origins are a mystery but the Loremasters say they have protected the forests since the times when Dragons ruled the world. With their magic healing powers*** and pure heart  s**** they represent all that is good in the world*****. The most famous Moglins are well known to most of you... but for those just joining us this year, here is a helpful guide!

There are many other moglins in the world... Truffle (the rarest moglin because she has wings), Quibble (the never-before-seen-used weapon salesmoglin)... and many others. Each has a unique story, appearance (Well, except for Invisi the invisible moglin), and ability. During your adventures you may encounter these creatures. Do not dismiss them due to their small size. It should be known that Moglins hold a significant role in the balance between Order and Chaos. Why do such little cute things always hold such secrets?

Forum Question: If you were a moglin, what would you look like? What color would you be? What would you wear? Would you have any markings or powers?