On the Outskirts of Darkovia...

... A pack of lycans scouts skirted around the border of the Lycan Kingdom and Doomwood. The forest was quiet, but something was unsteady. The Alpha of the scout pack lead the patrol  with the Beta close behind. Word of a demonic invasion spread throughout Lore after the assault of Lightguard. Until recently, Infernals were just ghost stories, tales told to young pups to keep them in line. Now, those stories have stopped. The adults were the ones that were scared now. The Infernals were here on Lore and they are hungry. They want land, they want blood.

Crossing Over the Styx

The Ferryman of the Underworld Waits for You

Man has killed man since the beginning of time. Each new frontier brings more ways to kill, and more ways to die. Every man who comes down to me thinks that his civilization, his era, is the most important event the world has ever witnessed. Every single one.

Charon, Ferryman of the Underworld, waits for you.

No Fear, No Trouble

Today a stoic passes over. He emerged from the darkness of the riverside and pays his toll. He pays in coin, as he was buried according to the old ways. I let him onto my ferry. He causes no trouble. The stoics rarely do. I’ve always hated that. The recently dead should fight for life, not meekly surrender. No, that comes later.

Today a fighter dropped by. He was scared, but also brave. He faces being dead with the same bravado that he likely faces everything else with. The ones with fires in their hearts are my favorites. He has no coin to pay. I heft my oar. I will enjoy this.

No one battles Charon and lives, because they're already dead.

No Answer To Give

Today I receive a philosopher. It is a purely human convention to ask questions that have no answers. I hate that. I’ve never understood the point of ponder quandaries that lead nowhere. He is constantly talking, talking, talking. He asks so many questions. I ask him the only question that matters. As it happens, he doesn’t have the coin to pay my due. Before I give him my oar, he asks me if there is any such thing as eternity. I answer ‘Certainly not for you’. It has been a long time since I laughed like that.

Today an artist creeps aboard the ferry. He has the coin to pay. The artist doesn’t ask questions like the philosopher does, but he seems to be always thinking. The artist looks, studies, internalizes, and all without a sound. He’s looking at me and won’t stop, something I never could abide. I consider lifting my mask, but even I am not that cruel.

Take on the Hydra AND the three-headed guardian this Friday!

Magic Has Been Tainted

Discover the Threat in the Center of Lore!

Hundreds of miles below the town of Battleon, cracks race across the face of the crystallized mana core that is Lore’s heart.  The spiderweb of fractures crawls across a surface untouched by man or beast for eons.

The sound dies, and silence reigns once again in the empty chamber surrounding the core. Crystal dust settles to the floor. All is still, and safe… for now. 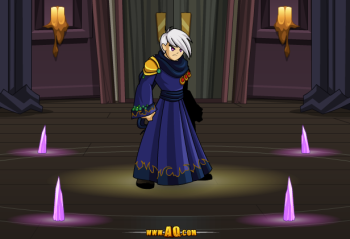 Stilling his thoughts, maintaining calm, Warlic thrusts his mind – his consciousness – into the network of ley-lines crisscrossing Lore, feeling for anything… out of place.

In the eternity between one breath and the next, he identifies 11 cancers in the veins carrying mana around the world. Sees the rot eating away at key ley-line intersections.

His eyes fly open, and the candles spring to light. In the outer chamber, his familiar springs from its perch, flapping to the forge of the Mad Weaponsmith. Warlic presses his lips together, smiling grimly. It begins. FINALLY, it begins.

He must meet with Cysero NOW. They will need to gather reactions from mages across Lore. Anyone actively drawing on the ley-lines will have felt what he did.

Hundreds of miles below the town of Battleon, a single eye opens...

This week's story is a prologue, hinting at what is to come during the end of the 13 Lords of Chaos Saga! You will not discover EVERYTHING about Lore's mana core tomorrow... but you will journey to the Center of Lore and see many things no Hero has seen in many millennia.