The biggest event in our gaming history

When did you first start playing AE games? How long have you been playing? How is it possible that we will have been creating weekly releases together for 10 years next week? 10 YEARS!?!?!? We need to do something special.

Not just special, we need to do something bigger and crazier than we have ever tried before. We need to do a new "1st!" So join us next week, on Friday, October 12th @ 6pm EST for a special event that will span ALL 6 of our major games! 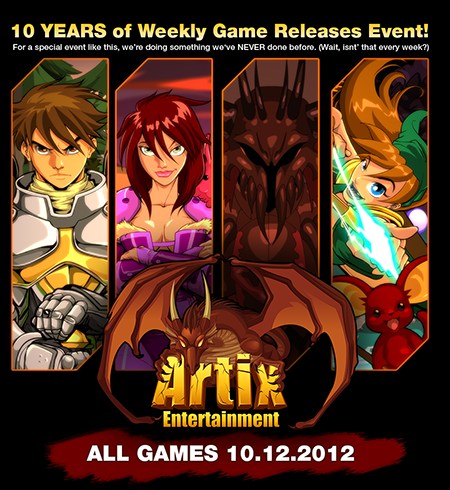 AQWorld's 4th birthday event will be combined with Artix Entertainment's 10th Anniversary event, and the team promises that it will be EPIC! Prepare to help the AQW team and 30,000 of your fellow Heroes in the biggest birthday bash AQWorlds has ever seen... and the special guest star is YOU!

And prepare to face Death head on in tomorrow night's release when you head into the Underworld!

Read more about Artix our 10 Year Anniversary event on Artix.com!

Tags: Artix, So much going on, October is the month of PARTIES,