Chronomancer and The Dragon's Secret!

Heromart is online and ready to deliver Artix Entertainment swag to your door!

As long as you live in one of the 41 countries (the list is still growing!) to which we are able to deliver.

The first ever AE NOVEL, The Dragon's Secret is now on sale! 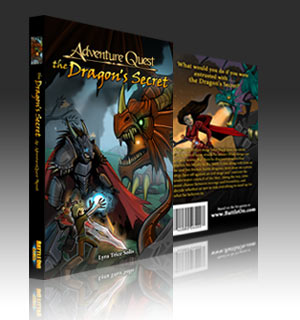 It comes with a special weapon in AQW, a pet in DF, a weapon in MQ and a LOT of stuff in AQ classic!

The AE 2011 Year of the Moglin Calendar will go on PRE-SALE on HeroMart this Thursday, but probably won't be delivered until later November. We did have a few on hand at ShadoCon this weekend so you might even see a few people walking around with the class that comes as a bonus with the calendar! 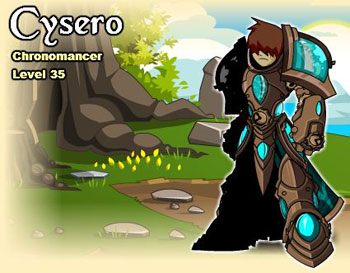 Here is a brief write up of the class, courtesy of Beleen.

Chronomancers regain mana when they attack while under the effects of Temporal Rift, a Rank 1 ability. Although the Chronomancer excels under many different Enhancements, the Hybrid Enhancement is often the most common choice.

One For The Cheaters

Some of you might have already seen some people running around in Chronomancer Class. Most likely, they were cheaters beacuse only 7 players have actually purchased the calendar from our merch booth at ShadoCon.

We missed a key element in our hack-protection for the shops that are unlocked when you buy the calendar or novel. The issue was quickly fixed but we have a long list of people who decided to use a cheat program to open the shops for the calendar and novel this weekend.

It's one thing to open a shop without doing the quests, it's another to cheat your way into a shop that should only be availible to players who paid real money for the merch and in-game bonus items. That's called theft. You're cheating at the game, you're cheating AE and, worst of all, you're cheating your fellow players.

As punishment, ALL of those accounts have had those items removed, they will be banned for 3 days and every single one off those cheaters will have all of their Character Page Achievements removed and replaced with one single Cheater Badge.

In addition, those players will not be able to display any future achievments on their character pages.

There is a way out of it... pay for what you did. If any of you cheaters would like your character pages returned to normal you may purchase a membership upgrade that is 3 months or longer. Your account will have a note attached to it and if we have any further issues with that account it will be dealt with more severly.

Remember that you brought this on yourselves by cheating and... enjoy.

This Weeked! Ledgermayne for ALL & Hollowsoul Expanded!

it's time for ALL players to show Chaos Lord Ledgermayne what's up! This Friday the Arcangrove Finale opens for all players, and we'll be adding a few new member and non-member drops to the Chaos Lord!

Non-members, you will probably want to pick the member's brains to find the best method for bringing this being of living magic to its knees! It's waiting for YOU!

The member-only Hollowsoul Castle will be getting an expansion. The Duke Ellington is once again seeking help from the best of the best to quell the endless castle's endless hunger for fresh souls! 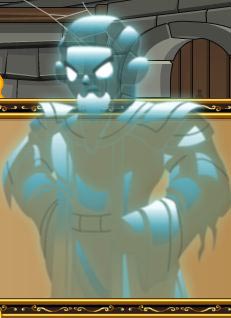 In the expansion you will find some new secrets and a merge shop where you will be offered the chance to upgrade some of the older Hollowsoul items!

Mogloween will also be leaving this Friday as the town of Mystcroft pull back into the mists and vanishing for another year. Be sure to grab all the Seasonal Rares that you want before they disappear!

This weekend was the first year for ShadoCon, Tampa Bay's anime, gaming and comic convention. Since it's right down the road from the underground-lab's surface, and since One-Eyed Doll was going to be in attendance we decided that we should at least have a merch booth set up. 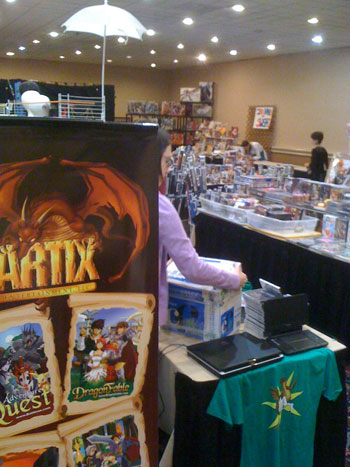 We brought a laptop so people could just sign-up for an AQW account right then and there! We were able to meet a few new people who play the game and meet back up with old friends who are crazy enough to attend every con we attend. It was awesome!

We were also able to hang out with Kimberly and Junior from One-Eyed Doll. They arrived on Friday, exhausted from driving all the way from Atlanta where they had a show the night before. Due to some scheduling confusion they were a little late for their meet and greet, so I volunteered to sit at their table and pretend to be them until they arrived.

Wearing the "I'M THE END OF THE LINE" sign confused most people. That pleased me.

They had a ShadoConcert on Saturday night, which melted some serious face, and a fun suite party directly afterward where serious AQW fans and serious OED fans got to hang out together. My friend Alces took some footage with his phone. If I can get my hands on it, i might post it later.

Once again, thanks to everyone who came out to visit us. I've said it before and I'll say it again, it's always super swoop to get to meet and hang out with our players in real life. Thanks for coming out, supporting AQW, buying some CDs, shirts, calendars, and novels and showing some love for Kimberly and Junior. :)

Battle MAGIC ITSELF* this Friday

Minimal created a new combat feature for the upcoming Chaos Lord Battle in Arcangrove. It is really fun experimenting with ways to make the battles more interesting. In this fight... were you stand will be critical to victory. The release will happen tomorrow around 6pm EST.  Beleen will be running the show from the lab while Cysero, Zazul, Faith and I attempt to secure an internet connection and join you from our booth at the ShadoCon convention.

* Pretend we used a cool super deep voice with an echo when you read that. 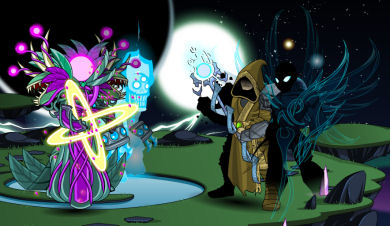 Forum Question: How good are your marketing skills? We have not updated our AQWorlds ads in ages... I think the last one was the one of me wearing my Pally undershorts... do you have any ideas for funny and creative AQworld's ads? Use your character! Come up with a funny slogan or situation and let us know. Who knows... maybe your character will end up plastered all over the internet O_O (Of course do not click on aq ads when you see them, those things are crazy expensive! Always type in www.AQ.com to visit the site and play the game.)