The Eye of Chaos Sees All

An ill-wind blows through Lore, and Chaos is on the rise!  Seek throughout Lore for the special item that will reveal a secret about the upcoming Lords of Chaos Finale!  Changes are coming - whether they be good or bad remains to be seen. 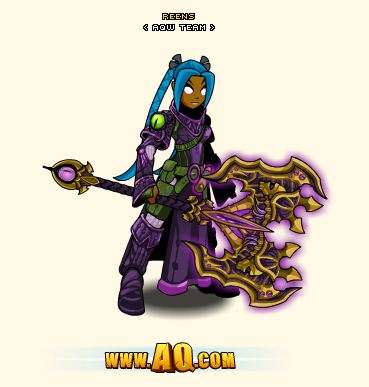 We've added a special limited-time drop to the Chaos Dragon in /castleroof - the Cry of Chaos axe! Slay the dragon for a chance to get the axe. Hold onto it, and sometime next week, its in-game description will change to reveal a secret about the upcoming chaos finale. Talk to Beleen in Battleon to start the hunt!

The puzzle-driven J6 area got a big expansion this week!

If you are up to date all you need to do to continue your space-western adventure is enter the Hyperium's VR room and head to the next area!

If you're NOT YET up to date, you will need to play through all of J6's previous content to get to this week's map, items, the much-coveted J5 armor and several cutscenes that raise a lot more questions about this masked man.

In related news, J6 will be at DragonCon with the rest of this year, so if you can make it to our annual panel at DragonCon in Atlanta, GA at the beginning of next month, then you'll get to meet the man behind the mask.

Once again we have taken a number of suggestions from players just like you and pulled them into the game in Yulgar's Player Suggestion Shop!

This week, both Dage and Mennace chose to reshape these items into AQW items!

As usual, each of these items have been given to their creators regardless if they are member, non-member or AC items.

If YOU have an idea for an item that you would like to see brought to life in AQW, please visit out Suggestion Forums and make a post. Who knows, maybe yours will be in the next round!

Please, remember: Even thought we do like to see your art and ideas on Twitter and Facebook, We ONLY take items from those forums to add to the game! We don't add every items in the forums, but if it's NOT in the forums, we WILL NOT add it.

It's a new month and that (sometimes) means a new PET O' THE MONTH!

This month, in honor of the completion of the Vordred Storyline and the internet's recent fascination with ponies, we've combined these two ideas into one terribly cute monstrosity of necromancy.

Introducing the member only BATTLE PET (Works as a normal pet, but for NECROMANCER it will replace your Skeleton base pet for damage dealing!)

He's been hugged and battle-tested against Noxus in the Shadowfall war to guage his lovable might. Visit Aria's Shop in Battleontown to get your own Vordred Nightmare Pony!

NO GENDER CHANGE THIS TIME!

Sadly, J6's maps are so insanely involved that Yorumi didn't have time to properly code or test the Gender Change option which will hopefully come next week but we did make a few changes that you might have already noticed.

QUEST TRACKER: The first addition is a new Quest Tracker Button on your character portrait.

It's right there on the left, opposite your level. Just click this and any quests you are on will appear in a list on your screen to help you keep track of what you need to complete it without opening your Quest Log every time.

CHARACTER PAGE UPGRADE: The second change is on your character page. Now you can look at almost anyone's character page and see exactly what they have equipped right next to their image. (I say ALMOST anyone, because MOD items do not show correctly).

Next week we begin work on our next CHAOS ZONE, you can also expect a Mennace LQS (keep watching the Design Notes for times, items lists, images and prices!). Until then, have a great weekend!