I Hope You Love Spiders!

Today we begin the new Maximillian Lionfang's Chaos Story. Many of you have long wondered if Lionfang, who began his life as a one-off bad guy for our first birthday event, would ever actually become a Lord of Chaos.

We're trying something kind of interesting and new with this release. Based heavily on Lionfang's established lore, we're back tracking a bit and showing you how you first met Maximilian Lionfang when he was a General for King Alteon. 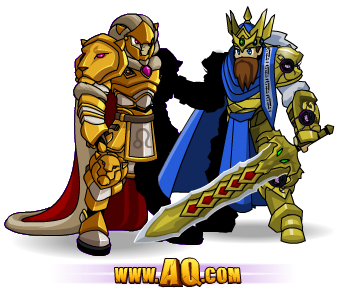 You will follow his lead to the ancient Blackhorn Tomb (some of you might recognize the name from last week's adventure) where General Lionfang has tracked an ancient scroll that might reveal a way to defeat Chaos itself! 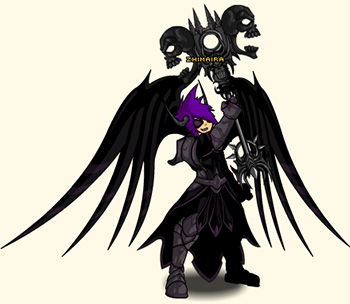 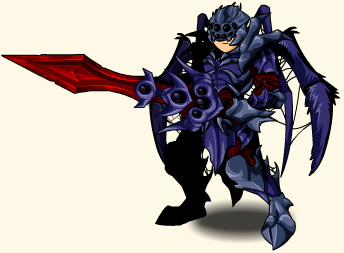 NEXT WEEK: Come back to relive a special expanded version of the assault on Lionfang's Keep, or play through it for the very first time!

Our newest and dumbest contest yet is live! Read ALL about it on the SUATMR Contest Page (pronounced soo-AHT-meer)!

WHAT IS IT?: It's a contest where you can win one of my or another dev or mod's rare items!

HOW DO I ENTER?: Talk to Cleric Joy in Battleon, click her SHOP button and buy a February Rares Raffle Ticket! You must have this item in your backpack or bank on the day of the drawing to enter the raffle.

WHAT CAN I WIN?: See the SUATMR Contest Page for a list of possible prizes!

I DON'T GET IT!: Really? OK, then you should really, really go read the SUATMR Contest Page. Seriously, read every word.

We've been getting a FLOOD of requests in recent months to sell the Ranger Class for ACs like all other recent classes. When I say a flood, I mean a FLOOD. Of all the the coming features that we've talked about or hinted at, all the bugs past and present this one change has beaten them ALL in terms of the numbers of people asking for this. 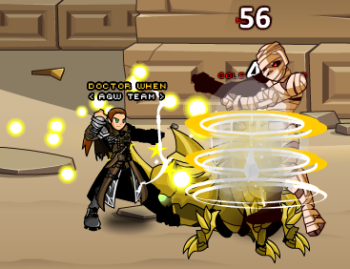 I've never been a fan of the idea since I thought that it was quite the badge of honor to have earned the class. More reasonable heads than mine pointed out that it's STILL a badge of honor if you earn it, even if a version is sold for ACs.

As of tonight, you will be able to buy the Ranger Class from Ragnar's Class Shop for 2000 ACs, BUT the earned version of the class, identical in every other way, will be renamed to the MASTER Ranger Class so you can more easily prove to your friends and other players that you EARNED this class.

This is the only Class for which we plan to make this concession, so enjoy it all you hard core Sandsea farmers (past, present and future)! Wear your Ranger class with pride!

A few changes to Twilly's Pop-up in Battleon. He is now hosting a Seasonal Rare Shop. This little shop is just an fun little option for people with ACs to burn who like the items he has. Every season (Spring being the next) Twilly will get NEW seasonally-themed items that will also go rare.

All you have to do is purchase Twilly's 2013 Ice Token and that will enable you to open the shop and grab ALL of the Seasonal items which are all 0 ACs. Items will go perma-rare in March when the Spring shop opens!

The new Mage base Class Art is live and with it the new Mage Armor in the mage trainer's shop.

Due to a large influx of player requests, the previous version of the mage armor will remain availible but as been renamed "Noble Mage". Dage really went all out redesigning the base classes and we are now VERY proud that new players, just coming to AQ.COM for the first time will be greeted by these amazing classes.

Recently, we have added a couple of special offer pop-ups in-game for a very small amount of people who met the exact qualifications for the offer and a lot of people were asking "Why not me?!"

In response to this we have added a small array of NEW special offers targeted directly at YOU. If you DO qualify for these special offers, keep in mind that these are limited time offers and you might never see them again.

If you guys like these and continue to ask for them when we might expand the offers even further. If not then these will just... go away.

Members of our OTHER games were promised updated armors for their DragonLord, StarLord & Guardian shops in the Guardian Tower as a Frostval Gift. Sadly, a million things fell down on our heads all at once and these got backlogged BUT THEY ARE FINALLY HERE!

Alina says remember: Make sure to log in before Monday, January 14th, because that will be your LAST chance to access:

* This shop will go PERMA-RARE! Welcome in 2013 with some of the shiniest gear of the season!
** This is the LAST Limited Quantity Shop we will do. Once this gear is gone, it will NEVER return!

This weekend Artix, Dage, a few of the other team members and I are getting together to sharpen out Mobile Development skills. I can't even say that we're making a game, per se. I will say that we are making something very small and barely functional for multiple mobile devices.

Whatever we spit out at the end of this weekend might just be a total disaster but we DO plan on releasing it for free on as many mobile platforms as we can figure out,

Keep and eye on our Twitter feeds, Artix.com and the AQW Facebook Fanpage for updates to see how things are going!

Have a great day.

DUUUURRP! Did you guys enjoy our April Fools Day release? I love it when I get to draw—as you can see, this is why Artix and Cysero won’t allow me to draw on a regular basis =D

Herpaderp your way to Battleon by Monday (April 4th) to see the totally derptastic transformed town and score my derpalicious loot! You'll huurp until you can't deeerp anymore!

Khuddar the Black Market dealer is back in Battleon! And he’s got some of the coolest (and RAREST!) items ever seen in Lore.

This shop was released at 1:00pm EST so if you’re just joining us now… some of the items might already be sold out. It is called a Limited Quantity Shop after all! If you want to get a piece of AQW history, then you better stop reading this and head into game before it’s too late!

Stratos, Captain of the Phereless, has pulled into port at the Skyguard's airship docking and refueling station. After exploring the steamy halls of this amazing floating city, why not spend some time aiding the Hover-base's residents? With a stock of steampunk items in the stores and a copious number of quests to complete, you'll be able to begin building your Skyguard Reputation!

Only select Members will be able to arm themselves with magi-technical armaments, constant companions, secure item storage, and steampunk hairstyles straight out of the VicLorian Era! If you haven’t already upgraded your Membership… now is the best time to do so! Because the only way you can get into the Skyguard’s Hover-base…. and other member-only areas…. and equip pets… and increase your weapon damage with the best Enhancements… and use special Classes… and access the member-only servers… and use some of the coolest items in game… and supporting your friends who make AQWs possible… is by becoming a Member ^_____^

Rangers are stealthy, wealthy and wise to the ways of their opponents. Able to take down tyrants without blinking an eye or breaking a bowstring, you’ll range far and wide in this armor. And it's NOW available in the Sandsea Rep Shop!

When you’ve accumulated Rank 10 in Sandsea Reputation, talk to Zhoom and become the greatest Ranger the world has ever seen! So let us begin the Ranger Class write-up!

And as a newfound Ranger, it is important to understand how the Class works. Rangers regain mana when they strike an enemy in combat and when they doge any attack, also restoring some HP. Rangers heavily rely on their Strength, Endurance, and Dexterity stats, so choosing Enhancements that aid these three things will aid you in battle. A great starting Enh would be Thief.

Remember, this Class can only be obtained by those who have their Sandsea Reputation maxed out at Rank 10. If you have already completed the Sandsea saga and still need more Rep… try asking the NPCs in the Oasis and farm those quests! The dailies there award massive amounts of Rep, too!

WOAH! Even more items? And even MORE player suggested items? How wonderful is this?

We wish we could put every player-inspired item in Yulgar’s Inn…. but we just don’t have enough artists (unless you want me to DERRRP all of your masterpieces! Ahhaa!) But if you wanna have a chance at seeing your item in game, head to the forums and post your pics there!

*looks up and realizes how PINK text there is*

Tehehe… well it looks like I’ve done my job at “summing” everything up! On behalf of the entire Team, we hope that you enjoy this HUGE release and have a great time playing through the weekend!