WAR: You're a Vampire!

There are rumors foating around about this new vampire lord named Incubus. 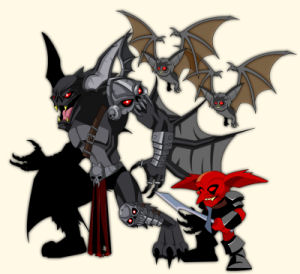 Safiria has said that he was once one of her loyal vampire subjects but has decided to strike out on his own and try to grab a piece of the pie for himself.

(There's a blood pie joke in there somewhere)

We're not EXACTLY sure what he's planning but it involves him taking over Battleon AND Mystcroft with his army og Vampire Ghouls, Vampire Bats and Hemogoblins.

This is a call for ALL HEROES to defend Battleon. It's time to put aside your differences and join the battle. It doesn;t matter if you are a member or a non-member, good or evil, pirate or ninja, werewolf or vampire... we need every one of you!

This war features an interesting twist. If you are one of the heroes who has been stockpiling Candy Corn then this is for you. Donate enough Candy Corn to the war effort and the MEGA Defender medals will start dropping faster... and faster.... and faster. It all depends on how much you donate!

There are brand new item drops coming from the war monsters and some REALLY great stuff drops off of Incubus... if you can get to him in time to save Battleon and Mystcroft!

Kimberly has decided to give you some musical encouragement to help you in the war effort.You can hear One-Eyed Doll's new single, "You're A Vampire" as you fight through waves and waves of bloodthirsty minions. 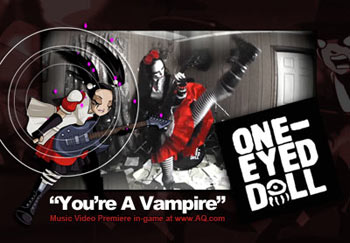 In an AdventureQuest Worlds FIRST, we are also happy to be able to show you the brand new MUSIC VIDEO for "You're A Vampire", starring Kimberly and Junior and directed by Patrick Kendall. This is also a special version of the video that you won't see anywhere else (until it hits YouTube). AQW player XYO lent us his talents and edited AQW in-game art into this special AQW version! (that's a low of AQW!)

To view be one of the first people in the world to see this music video premiere just click on the "One-Eyed Doll" button in Battleon or from the first room in the WAR! 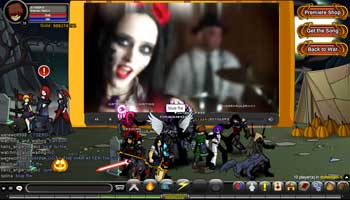 You will also be able to grab a few Video Premiere items that we made to celebrate One-Eyed Doll letting us be the stage for the world premiere of their video. 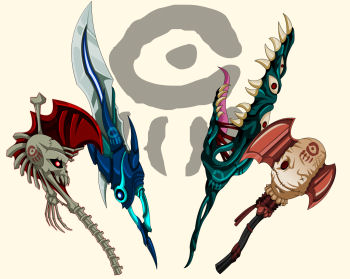 Next week the 2nd Upholder offer ends and the Character Page Badges and Onyx Star Sword rares will be delivered to all of AQW's 2nd Upholders so if you're the tyoe of person who likes to wait until the last minute... this is it. The last minute is here! 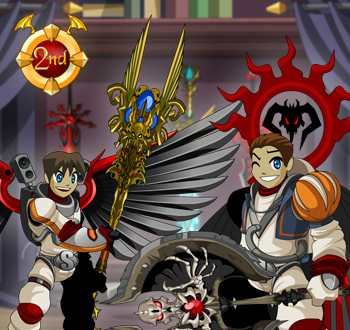 Remember: If you miss out you will NEVER have another chance to become a 2nd Upholder and you'll have to wait an entire YEAR just to become a 3rd Upholder!

Our Pumpkin Carving Contest is still going strong and we are really loving all the great entries (minus a few who folks try to pull one over on us, rather poorly i might add) and you still jhave time to enter! Remember the First Prize Winners get a custom made Mogloween sword that only a handful of people in the entire game will have. We're talking like... 10, max. That's counting mods.

It's time to bust out your carving sword and hack n' slash your way to artistic victory!

Wow, that just went in a weird direction. Sorry.

The contest ends THIS SUNDAY, Oct 31st, so get to it!