Legion Paladins are the dishonest and evil protectors of… DAGE and DAGENESS! Heh, but really... You used to be a Paladin and now you’re the undead minion of a seemingly invincible armored lich. Use your skill in both light and darkness to strike down all who oppose.. Whatever you believe you’re fighting for.

How to Unlock Legion Paladin Class

When you buy a Legion Armor T-shirt or Paladin Armor T-shirt from Heromart.com, each comes with an awesome weapon and half of the "Legion Paladin" class. Combine both halves to create the full class in AdventureQuest Worlds! Themed after the shirts... we merged Artix's Paladin armor and Dage's Paragon armor together into a horrifying and powerful new class. 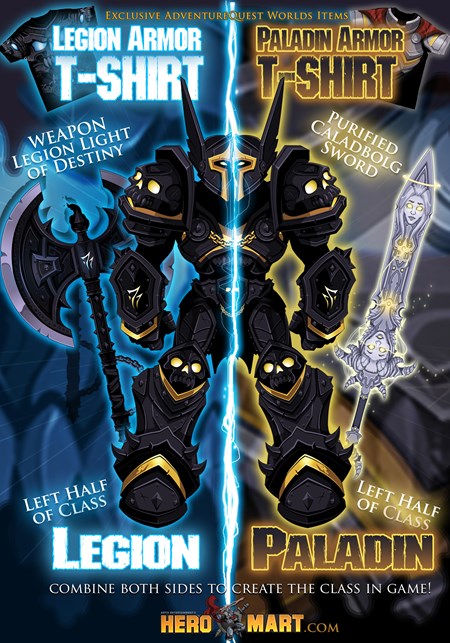 Auto Attack: Pretty basic. 2 second cooldown.
You need to be able to swing around your weapon somehow.

Increases damage taken by 10% while increasing damage done by 25% for 6 seconds.

Heals up to 2 friendly targets.

Does increased damage, but applies Bones Aflame, doing DoT damage to yourself.

Neat little passives. Helps you survive more. Not much to say about it.

Damages enemies while enhancing mana regeneration with a guaranteed crit.

Overall View of the Class

Legion Paladins gain mana when they strike an enemy in combat. Most prefer strength, intellect but don't mind endurance and dexterity.