After thousands of years of imprisonment (and after weeks of us hunting him down), Tibicenas the Chaos Djinn is finally FREE! You and Zhoom must follow Tibicenas into the Djinn World and stop him before he takes his vengeance on the King of the Djinn, Efreet... and on the rest of Lore. 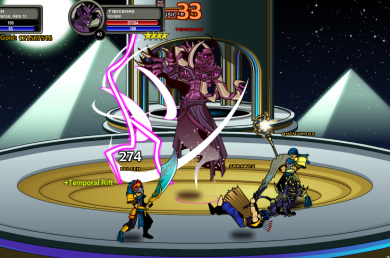 Thought the other Chaos Lords put up a fight? Had trouble with Wolfwing, did ya? Just wait until you encounter Tibicenas. This Chaos baddie has a new battle mechanic armed with a life-stealing AOE.

But wait—there’ more! Tibicenas has 40,000 HP, a 20% chance to Crit, a 30% chance to Dodge, and goes Berserk once his HP falls low enough. You better have a Healer (or two!) in your group if you hope to defeat this Chaos Lord.

So let’s say you beat Tibicenas. Itchin’ for a tougher fight? Talk to Efreet to try your luck against Ultra- Tibicenas! 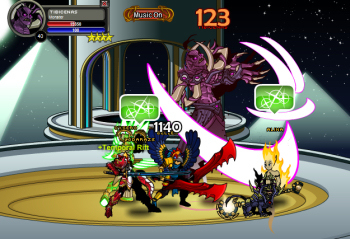 Only the most powerful Members will be able to take on this dangerous foe. Not only does Ultra-Tibi come stacked with a whopping 100,000 HP and an 80% life-stealing AOE, he also has a new ability that will stop you right in your tracks. His Petrify spell cannot be dodged and cannot be undone… and since you can only have 7 heroes in this particular map… you had better hope that your battle-buddies are well-armed and ready for a long ‘n crazy ‘n heated battle against Ultra-Tibicenas!

Both forms of Tibicenas are LOADED with item drops… but the ONLY WAY to get the Color Custom Zhoom Armor, Zhoom’s Dragonbow, and the Efreet Amor, Hair, and Face helms is by being a Member so that YOU can partake in the Ultra-Tibicenas battle!

A Sandstorm of new Sandsea Items

Quibble is staying in Battleon for one more week! And he’s got the new Malani Warrior set in stock! 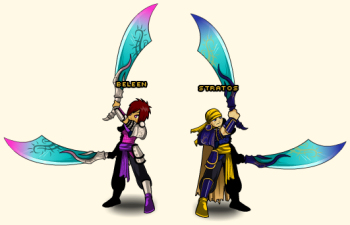 In addition to Quibble’s awesome new swag, the Chaos Sphinx will now drop the Sphinx pet, new items in the Sandsea Rep Shop, the Harpy in the Djinn world will drop her headdress, Tibicenas drops 7 items (including his Djinn armor morph!), and Ultra-Tibicenas has 8 items for you to obtain…if you can defeat him that is!

But there’s more! 13 more items, in fact. In the player suggestion shop! All of the items in this shop were inspired by our fellow players! All of the items here were inspired by your fellow players from our Forums.  Wanna submit your weapon or armor ideas, too? Head to the forums with your masterpieces because you never know if – or when -- your idea will make it in game and used by thousands!

Woah. Now that’s a lot going on tonight. We wish you the best of luck in the Chaos Lord showdown and hope your weekend is a great one.

Hey…hey… look what I have for you!

*shhhhhhhhhhhhhhhh* No one knows this yet… but I snagged a spoiler screenie of a few of the items from the Ctrl+Alt+Del Event tomorrow!

And that’s not even ALL of them! YES I’m serious!! Click that pic if you wanna see a bigger size so you don’t have to squint to see =D

Okay… I better get back to work before Artix, Cysero, or anyone else sees that I’m giving out even more spoilers  ^____^