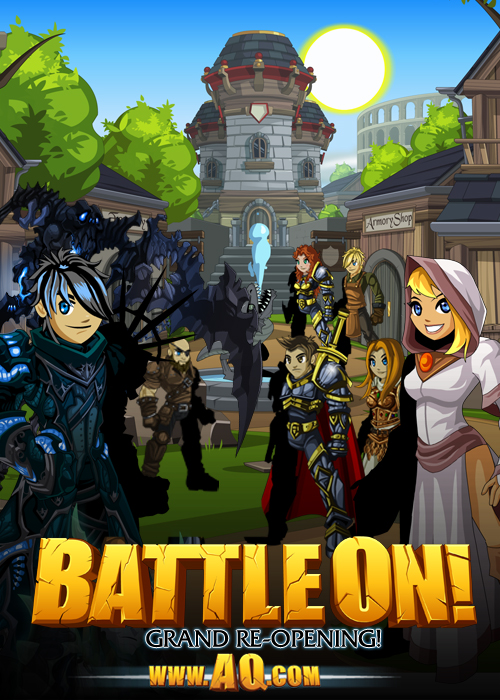 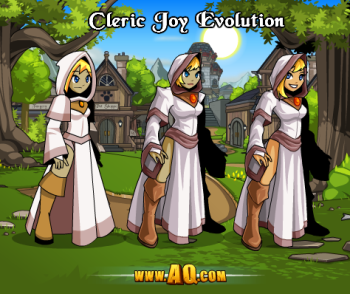 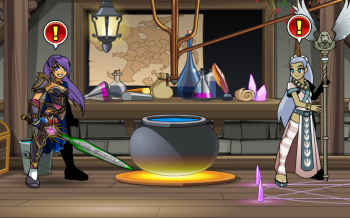 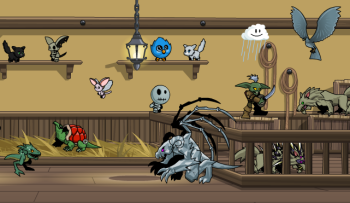 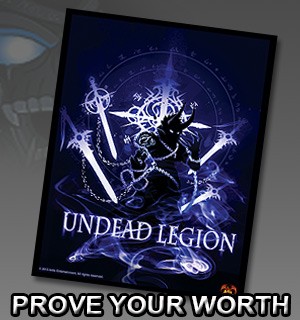 Grand Opening of the Rebuilt Hometown!

Grab a hammer this Friday, because you'll need to beat down the stray monsters lurking near (and loose nails popping up in) our newly-redesigned hometown! 50+ quests in the new Pet Shop, Museum, Apothecary, Armory, and more mean your battles have only just begun! And don't miss the new Suggestion Shop update: we turn your ideas into in-game items! 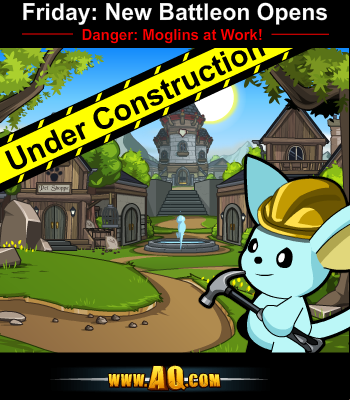 The new hometown is almost ready!

J6 has outdone himself supervising the construction moglins in rebuilding Battleon! New art, a new layout, new NPCs, quests, and shops mean that the home you knew will NEVER be the same! Besides removing /battleontown, Phase 2 of the Battleon redesign (not this week) will include a path to the right which will use travel cutscenes to take you through the Chaos storyline in order! (Who wants to ride the Dracolich Express to Doomwood?!) 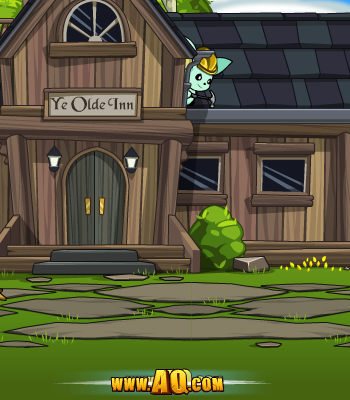 Yulgar is readying the Daily Adventures Board!

Zhoom leaves for the Sandsea, but a NEW (and familiar) helper for Yulgar will soon arrive! The Daily Adventures Board will show you all the tasks you should be doing each day, and we'll be shifting some of Yulgar's stock to the new buildings in town. 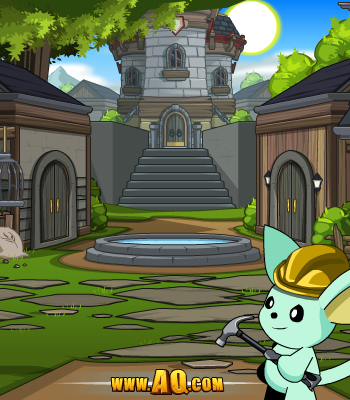 Many new buildings to the left and right! 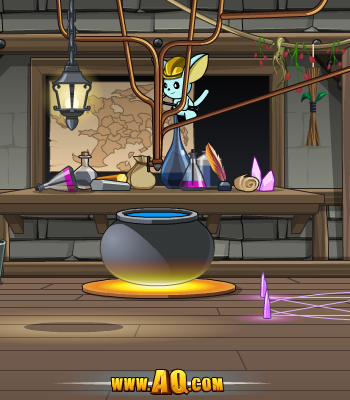 Quest for potion ingredients and
to learn the secrets of Alchemy!

There's going to be so much to do in the new Battleon, I'm not sure we'll get it all done this week... but that's what Phase 2 and 3 are planned!

Tags: Alina, New Battleon, So Fly Like a J6, Hammers and Nails, SO MUCH STUFF,

Strap on your hardest helm and equip your sharpest blade this Friday, because you're definitely going to want to see the next chapter in Lionfang's Chaos storyline - the updated and polished version of the Golden Onslaught War! You HAVE battled through the Blackhorn Tombs, right?

Last Friday's release took place in Lionfang's past (but you did not travel back in time. Try not to think too hard about the mechanics of that. Timey-wimey explanation!) Cysero's going to try to find time ("Heeeeeey time-travel fairies!") to build a timeline to make things easier to understand!

The team is ALSO going to be working on re-designing the town of Battleon (and Battleontown)! Current plans for the restructure include re-doing the Guardian Tower, updated town NPCs, FINALLY questing to unlock the pieces of the Blade of Awe and SO MUCH MORE!*

This project is HUGE and will take at least 2-3 Phases to complete, but work on Phase 1 begins this week!**

* Watch out for falling puns!
** Construction moglins are magic, and move so fast that the town's appearance is likely to change in the blink of an eye (or a server restart) once it is ready to release.***
*** Release date not set yet.

And to top off all the excitement, J6 and Beleen are planning out the next "J6 the Bounty Hunter" release! Speaking of J6... Don't forget to vote to send him into space in REAL LIFE!

Read the Design Notes for News

And See How Your Ideas Make AQWorlds Happen!

AE is a company built on direct player feedback; we always want to know what you think of our plans and how we can make them even MORE awesome! We want to see your drawings, hear your ideas, and find out what YOU want to see come to AQWorlds next!

Sometimes though, things get so hectic that the ideas we throw out on Twitter, the forum, or Facebook never make it to all of you. So remember: For OFFICIAL announcements of what's coming in AQWorlds, read the Design Notes and the homepage!

This is the button to click to get all your AQW news!

You've already found them, so you're one step ahead! Anything not said here is not officially planned. It's an idea, a thought, a "would this be cool?"

And even after we've announced the release schedule, plans may change. Nothing is final until the servers restart. Because as much as we may WANT to do something, sometimes we find out that it's just not possible that week. So keep an eye on the Design Notes for progress updates as we find them out!

Servers Offline at 12AM EST

AQWorlds Offline at Midnight for Maintenance

Our quest to optimize AQWorlds' performance continues! The game will be offline tonight, beginning at midnight, for around 3 hours while we clean up the database. We'll return as soon as all the junk 0's and 1's clogging it up have been swept clear and tossed into a binary trash-bin!

The server hamsters get a 1.5 hour break tonight!

A NEW version of the New Mage Base Class!

Friday's Design Notes tell the tale of the new Base Class art... and why it hasn't been released. While Yorumi works to find room inside AQWorlds to add the new Classes in, Dage re-designed the Mage armor in response to your feedback! The previous version of the Mage Class art will be available to buy in the near future.

Our art skills have really leveled up!

Now that the base class redesigns are finished, Dage is returning to work on the verification armors and weapons. We'll announce their release date once we have a better idea of when they will be done!

Work Begins on a New Battleon!

Tomorrow, Artix, J6, and I will meet to finalize the layout of the new Battleon! We are all really excited about our plans for how to expand the town! A library filled with lore about the world*, a brand-new pet shop where Aria sends members on quests to unlock pets**, Valencia's museum ***, and so much more! 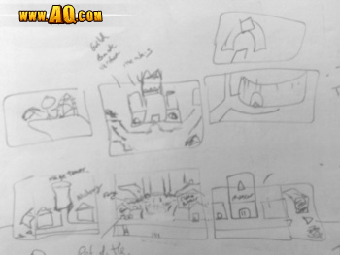 J6 will turn this sketch into incredible art!

* Would you like to write and submit stories about your AQW hero?
** This was one of my favorite parts of early DragonFable!
*** What treasure hunter can resist questing around Lore for relics?!

Join us this Friday as we explore one of AQWorlds most loved - and hated - villains! We've got so much we want to do this year, but before we do any of that, we want to jump right into the next Chaos storyline! 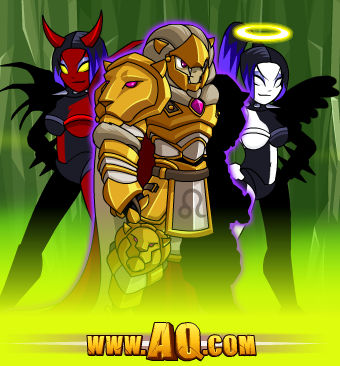 Evil and Good must stand together in the fight against Chaos... but General Maximillian Lionfang is willing to risk everything to prevent that Alliance! King Alteon needs YOU to aid Lionfang in his quest to find a weakness in Drakath's power or he will be free to play his deadly, Chaotic game and Lore will be the prize!