You've all been to the Librarium - that small room with all the bookshelves where Loremaster Maya hangs out. What you may not have known is that most of those big tomes are actually blank, just waiting for some brave Loremaster to go out and collect the information needed to fill them out. That's where you come in! 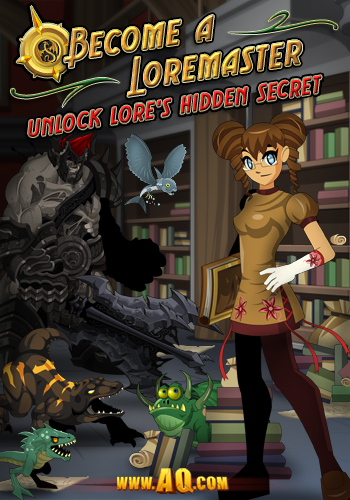 Grab yourself a whip and a gun!

As a Loremaster, our intrepid hero (that's you) will go out and conduct research on various creatures (in the form of beating them up until you have the info you need). What you'll be looking for are Unidentified Scrolls, written in a language that no one but the most experienced Loremasters can read. Take them back to Loremaster Maya, and she'll translate then and inscribe the information into the books in the Librarium. Afterwards, you'll be able to open those books and browse your critter collection at your leisure. 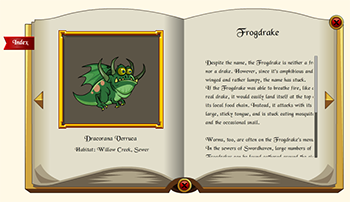 How this thing actually works:

You'll need to talk to Maya at the Librarium to unlock the Loremaster skill. Once it's been unlocked, you'll be able to open the book Creatures of Lore by clicking on a shelf in the Librarium. The Index will show you how many scrolls you've collected so far, as well as how many you still need, like so: 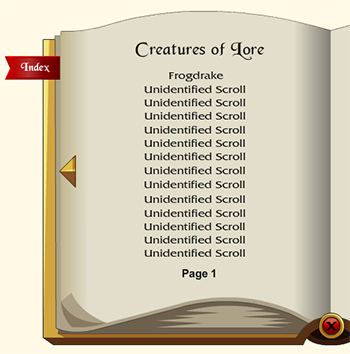 You can click on any entry to visit that scroll's page. If you click on an unidentified scroll, its page will give you clues about what creature you'll need to collect it from - the creature's silhouette, and its scientific name. 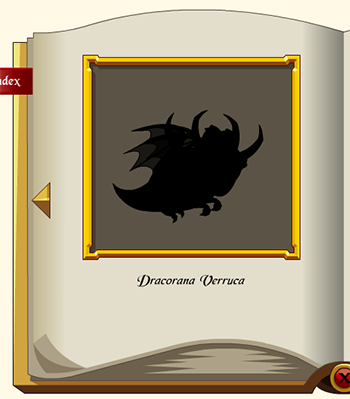 Gosh, I wonder what this could be?

Pretty simple, right? The catch, of course, is that not every specimen is going to give you a scroll, so you may have to farm for awhile before you get the one you want. So put together a group of friends and have fun!

Right now, there are only a few entries in the Creatures of Lore book. But we'll be adding a lot more in the future - as well as other books that will have you cataloguing different types of things.

The Void comes to ancient GreenGuard...

There’s no specific date for when the Void Incursion began. Spirits and elementals from that eldritch place had been materializing in GreenGuard for quite some time. No one can say when they became organized. It was I who first theorized the concept of a unifying intellect. I took the Elk Clan into hiding. Finding this intellect would be our way of fighting off the invasion.

The Eagle Clan dropped out of contact on the day that I tapped into the hive mind. I have lost count of the days since then. Every waking moment is a battle against the intruder in my head. When I sleep the dreams come, and sometimes, when I wake, the dreams stay. I am left walking through the nightmarish, rotting corridors of my own mind.

I have to stay secluded from the rest of my tribe. To see their Elder in such a state at such a trying time may be too much for them. Now that I have seen into the consciousness that is commanding the void forces, I know that this is a task that must be shouldered, no matter the cost to myself. There are more living, sentient beings besides the druids living on this fragile world, and I would not wish the fate that the void has in mind on any of them.

I can’t confront my tribe until I can keep the dreams under control, or at least competently pretend that I am in good health. But so often these days my mind is not my own. Sometimes I can feel this presence looking at me. It makes me feel cold. Cold and lonely. Sometimes I hear it talk, and I can’t distinguish the sound of it’s voice from my own. The only way for me to fight is to watch it back.

And so I say to this voice, this consciousness, I know you’re out there. And I’m watching you. I’m always watching. There isn’t a lot to do but watch.

Authors note: It isn’t often that I get the chance to speak personally to you all. The support and feedback that I’ve received from this community is nothing short of staggering. Words can’t describe the depths of my gratitude. So thank you. From the bottom of my heart, thank you. Tomorrow will be the advent of my first in-game release, and without your comments on the forums and on twitter, the AQ Worlds team would not have let me out of my cage for long enough to write it. Also, if it does well enough, they’ll actually feed me this week. Here’s hoping!

(P.S: To those who want to know how to pronounce my name, don’t worry about it. Just call me Nots or something.)