Ultimate showdown of ultimate EVIL! In the third and final installment of this Summer's Dage vs Nulgath War, we will finally see WHO has the greater army, WHO controls the Underworld, and WHO is the greater Commander of Evil! ... And YOU will decide who wins! 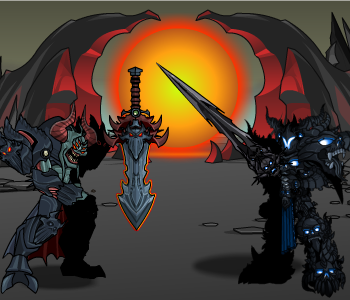 This Friday we'll release a new cutscene introducing the final push to annihilate your opponents, a brand-new area of the Underworld (ish) map to battle in, 2 new monsters, 2 new farming quests, and enough epic reward gear to fill an abattoir! (Look for previews of the new war gear in this week's future Design Notes!)

The decision all comes down to you and your fellow soldiers - Undead Legion, Nulgath Nation... who will YOU fight for?

Changes to the Legion Entry Requirements!

So many recruits have flooded Dage with requests to join the Legion, he has decided to gain entry into his dark, Undead Legion of warriors! Here are the new requirements:

Dage the Evil is removing the 200 PvP Combat Trophy requirement! Undead Legion, with this requirement removed, new warriors will flood into the Legion... exactly as Dage planned! (What do you expect from someone whose title is "the Evil"?)

Competition, striving for a goal, and having their athletic achievements recognized brings out the best in many people. That's why we're opening a Limited Time Shop (LTS) with a Lorelympics theme! Grab your color-custom Track Suit Armor, Gymnastics gear, and a whole host of sports-themed weaponry! We're also introducing the member-only Bronze, Silver, and Gold PvP Medals!

Players who currently own the Dark Caster Armor will soon be able to gain access to the Dark Caster Class! Dage is working on new art right now while Cysero and Yorumi design the skills! We will release previews of the art, a skill writeup, and the Class itself as soon as they're ready*!

BUGS! Battles! And beating up the robotic insects trying to take you down? Sounds like the perfect thing for any warriors, mage, Legionnaire, or Exiles! In Epic Duel's Infernal Infiltration war, Administrator 7 and his Legion are racing to head off The Lawman's Exiles as both sides race to take possession of the Delta Vault! 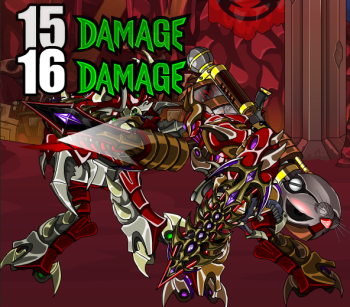 In the last leg of the war, bikes will slam into blades, Mages massacre Cyber Hunters, and Bounty Hunters on BOTH sides fight dirtier than they ever have! What's in the Delta Vault? ... No one knows! But if the other side wants it so bad, then so do you!

Roggark, one of the MechaChillid warriors, is coming to Battleon this Friday to recruit seeking aid for his Queen's army of robotic insect warriors. He's got a shiny Mechachillid Armor and Helm to offer any who wish to learn more!

What Raggork doesn't know is that AQW heroes HATE bugs! Take his armor, learn the deadly details about the war he has to share, then head to Delta V to take his buggy brethren down!

Yorumi spent the weekend monitoring the fixes he rolled to the servers on Friday. He's found some very elegant fixes to a few pretty large problems, but he's not done just yet! He's got a list of functions to clean up and other miscellaneous bits and bytes of code to create.

* You know what goes great while watching two armies battle for the supremacy of their overlord? Peas. Green peas, black-eyed peas, Black-Eyed Peas (Pump It!)... it's too bad that no matter what kind of veggie we offer, neither Dage nor Nulgath can be ap-peas-ed.