Face Your Fears This Friday

JUST as you arrive at the Phoenixrise Gate... Memet the Nightmare Moglin appears! She's got a terrifying test for Legends this Friday... all to satisfy a mysterious stranger and their need to know more about YOU! 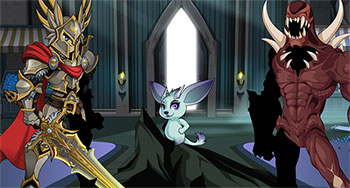 This Friday, Legends can /join nightmare to begin the Nightmare Gauntlet. Face some of the most horrifying fears Memet can through at you:

We asked you guys and the other AE team members what their worst fears were, then we worked those into this release!

Everyone's afraid of something. Failure, germs, their mother... whatever it is, it takes a strong person to face their fear and trample over it until it can't hurt them anymore.

So I got revenge against my nightmare of the past, J6 learned he's afraid of tiny little holes, and we have a NEW plan for the 6th fear: needles. This is probably for the best, as the the picures of lotus seeds on skin are REALLY gross.

When the world is falling to Chaos, it helps to have a few Good (or Evil) companions to battle alongside you... and THAT is why we introduced the Guilds system late last year! But every Guild needs a base to call home, headquarters to plan from and hang out in. So we built a way for YOU to build your Guild a City!

Link the first frame of your Guild City to many more!

Yorumi has been HARD at work on Guilds Phase II since last September (except when he gets interrupted, which is almost all of the time). Tonight, he's finally ready to release the Private Test Realm on Evil Sir Ver!

Read on to learn what the Guilds Phase II: Guild Cities Private Test Realm is all about, and get ready to BREAK ALL THE THINGS (in your Guild City. Don't break the rest of the game)!

Life's a beach, so build a Guild Hall on it!

This is the COOLEST Guild City!

Remember: Please help us keep all the bug reports in one place. Post ALL Guild City bugs to the Bug Tracker at Artix.com/Bugs!

Be one of the first to found your Guild City!