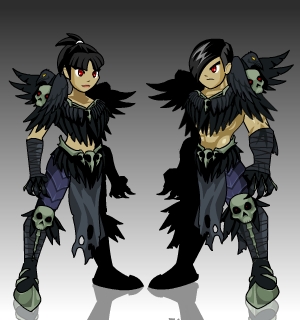 Our friend, former-chaos lord, and Friday the 13th brain slime fighter, and One-Eyed Doll lead singer,  Kimberly,  made a guest appearence with ArcAttack on the last episode of TV's America's Got Talent. ArcAttack is a very cool band because they use two tesla coils to zap metal creating music. Here is a link to a video of it on youtube that Raviteja sent us through Twitter. Note, the episode and the voting is over, so please do not call in. The first time we met Kimberly ArcAttack was shooting lightning at her just like this (You may remember from that one DragonCon Post)... All I have to say is -- Brains. Daaa naaa naa naa naa naaa naaaa Battle On

The Chaos Lord of Arcangrove?

On the topic of Chaos Lords... this week... something truley maddening will appear in AdventureQuest Worlds. This is so unthinkable... and improbable... and dangerous.... that I would like to once again remind you that AQWorlds is not like other games. The story is growing under your feet. Being created from scratch by the team and your suggestions at the beginning of each week and released on Friday. Unlike other games it is possible for a Chaos Lord to actually win this game if we were to fail.... ANYTHING can happen! This week, you will also discover that ANYTHING can BECOME a Chaos Lord...