Crash into the Chaos Beast battle this Friday! In The Span, Chaos Beast Kathool – a near-immortal creatureimmune to Time – has allied with Drakath and rises to confront you!* Victory against the Chaos Beast unlocksthe battle against Iadoa, the Chronomancer Chaos Lord! Summon your strength, Hero; Lore’s existence depends on your success! 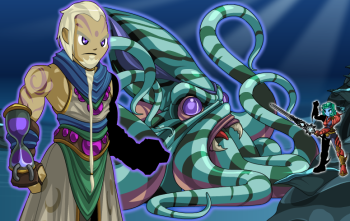 Will you have time to defeat the Chaos Beast AND Chaos Lord?

Did You Say Chaos Beast Kathool?

You read right,apprentice Loremasters! Kathool is the first self-aware Chaos Beast, and there's a good reason it was chosen for that purpose. When a new Chaos Beast is raised - or takes over the position of its own accord, in this case - the Chaos Lord's purpose is fulfilled.* And for a creature as power-hungry and self-assured as Kathool is, the temptation to use Chaos - and the Chaos Lord - for its own ends is too enticing!

Log in this Friday to learn how Kathool chose to become the Chaos Beast, what it plans to do with its new power, and what the Chronomancer Chaos Lord will do to ensure that you fulfill your destiny!**

* Drakath has never required the Death of a Chaos Beast, just the power gained when each rises.
** Choose wisely and you may also learn the truth of your role on Lore! Who ARE you, Hero?

Events and Shops Coming and Going!

Make sure you don't miss the following arrivals and departures of our recent releases and shops:

The holidays are here, and that means even MORE is happening in AQWorlds than usual!

SPOILERS: Get ready to battle on, because 2013 will be the most Chaotic year yet in AQWorlds! Chaorruption floods Lore as Drakath moves to open the Chaos Gate!

Return to The Span Friday for a lesson in Chaos!

Fiery dungeons, legendary heroes, and a ChickenCow in a TOGA?! How is THAT supposed to teach you about being a Hero? As the Chaorruption continues to grow stronger, will you be able to gain the knowledge you need to know before Chaos completely infects the your Professor? 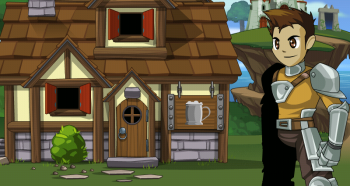 Find pseudo-Falconreach, Ash has much to teach you!

If you haven't started our current Chaos Saga storyline, /join thespan to begin learning why you are here... and what your destiny is! But hurry, because your teacher is the Chaos Lord, and he is quickly losing control over his sanity! 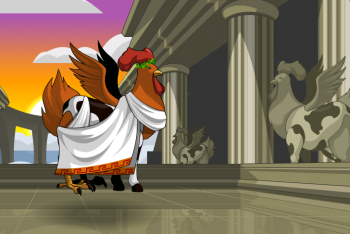 When Chaos turns your classroom into an endlessly-confusing maze of fire and doomstone, you'll want to grab a pencil and paper and map your adventure... or you may NEVER find your way out!

And Then Check Out the Rest of Our Release!

Wait, What About the Sword of the Legion Shop?!

If you held onto your Sword of the Legion from this Summer's Dage vs Nulgath war, you'll be excited to learn we haven't forgotten about the shop it is supposed to unlock in Shadowfall! That will come sometime during December, after we release Frostval!

We've brought on TWO new assistant artists, and they have already begun contributing to the weekly releases! Welcome Vokun and Tyronius to the team! You'll see even more of their work as the weeks go by. We're excited to have them join the team at such an AExciting time of the year!

You Are All Awesome!

Over the past week, we've received a lot of very helpful feedback for improving the new tutorial. You guys are directly influencing how new players will be introduced to AQWorlds, and that means helping your future /party or /guild members understand the game and how to play it better and faster. Thank you so much!

We'd also like to toss out a thank you to the mods and AKs on the forum, where we posted the feedback thread. They work hard to make sure you have a safe, fun environment in which to talk about AQWorlds and the rest of our games.

Take on the ultimate enemy this week in The Span! As Iadoa struggles to battle the Chaorruption infecting him, YOU need to battle the zone's first Chaos Beast! Will he be able to hold on long enough to teach you what you need to know in order to defeat Chaos?

Battle through a reconstruction of the AdventureQuest timeline. Take on a vicious fire dragon, study in the Temple of Hope, and defeat the ultimate Chaos-construct: Carnax, the zone's first Chaos Beast! Of all the creatures and golems he's created so far, Carnax is Iadoa's most EPIC one yet!

After playing through the release, members can access the Member-only Ultra Carnax Challenge Fight! You'll need a whole party, because his knockout LAZAR-punch can hit for 8,000 damage! But that damage is divided by the number of people in your /party! Victory comes with character and Book of Lore badges!