It’s Tuesday! And you know what that means: an all-new limited time Artist Showcase Shop in Battleon!

This week is dedicated to Hizu, our very own volunteer animator for AQW. Hizu has a hoard of Ninja-themed items that will make you stand out of a crowd rather than blend in!

When you look THAT good, you WANT be seen. Just make sure to buff your Stealth Stats if you wish to pursue the way of the Ninja.

Ever wonder how AQW Monsters learn their attacks? Hizu teaches them! Every week when Hizu isn’t slaying pirates and robots and robo-pirates, that Ninja sneaks into Lore’s monster training camp and animates Monsters with vicious attacks. He’s been hard at work since June 2011—and now you know why those Monsters are so dang difficult! Grrrr!! 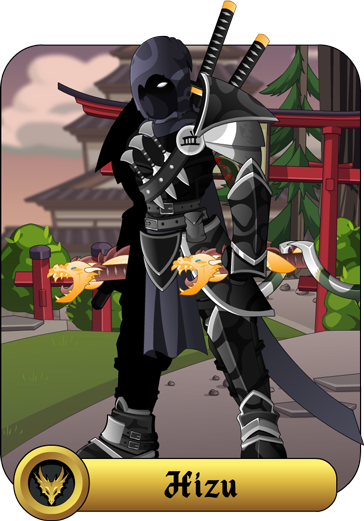 Hizu wanted to be an animator/monster attack trainer ever since he feasted his eye* on Samurai Champloo back in 2005. Hizu always wanted to create something that others could see and enjoy, and thus began his vigorous animation conditioning. Hizu’s favorite thing about Artix Entertainment is how accessible our games are for newcomers but insanely deep with thousands of years of lore to tell an endless story.

*Hizu only has one eye! Perhaps he dodged a Ninja Star a second too late?

Every Tuesday**, AQWorlds releases a limited-time Featured Artist Showcase Shop loaded with items that an Artix Entertainment artist creates. Using his or her own style and flair, our wonderful artists create truly amazing Armors, Weapons, Helms, and other Items just for you! But these items are only available for 1 week, replaced the following week by another artist’s items.

**Quibble got a brand-new shipment of items last Tuesday and wanted to showcase his stuff instead! We’ve known that traveling sales Moglin for a long time, so we gave him dibs.

Get your Ninja on in Battleon’s Artist Showcase Shop!