First he draws his 6-shooter... then he draws it!

Today, we experimented by having our very first LIVE drawing session. J6 streamed a live video feed of his screen allowing players to watch him as he drew a weapon from scratch. Thank you to everyone who came to watch. We hope you enjoyed it and will definately be doing it again in the near future. Watching J6 draw is a lot of fun! (Maybe Miltonius can do one for us also?) I was on the Sir Ver server with my PMs on tallying up the votes from players to determine what he should do next (they flew past at 20 to 30 tells a second -- it was crazy)  The items J6 drew during the event will be available in tomorrow's GIANT finale release. 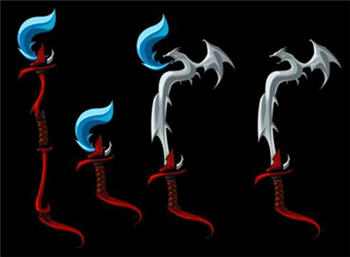 Special note: We voted on everything while he was making the weapon. The winning vote for the handle color was between Red, Blue and "Chuck Norris" We all had sprayed our monitors with our drink when J6 actually pulled up a picture of Chuck Norris and picked colors directly out of his beard!

Regarding the upcoming Friday the 13th Event

... I just got off the phone with George Lowe. \trying to keep a secret... failing/ This is going to be fun!