Year Of The Sock

If you completed the quest last year you'll need to do them all over again this year to unlock Lim's New Year's Shop, but this isn't the same old shop as last year...

I mean, sure it's got all the same items as last year to help you ring in the new year in style and something like class, But we've more than DOUBLED the number of items availble to you, including 2 brand new armors sets with matching weapons and all new 2011 themed weapons, which will go RARE as soon as the event closes... because New Year's Eve 2010-2011 only happens once.

Quibble has also recieved his last items of 2010, Skyline's Moglin Defender set. It's a whole new take on the furry, little things re-rmagined in steel plate and shiny gold! There's even a matching pet! 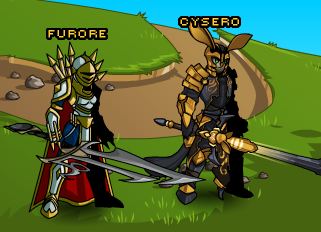 Quibble WILL be leaving NEXT FRIDAY (finally). I really hope everyone who got ACs or Battleon Points has gotten everything they want out of the overloaded little moglin. We'll be sad to see him go but look forward to his return. I wonder what he's going to bring next time?

NOTE: THE GIFTBOXES WILL NOT OPEN UNTIL SOME TIME TOMORROW, as previously stated.

After completing Lim's Quests you will also be able to open his House shop which contains only two items but two very SPECIAL house items.

The Jukebox item that will allow you to make everyone in your house dance but it only works for the owner of the house. Just click it and watch everyone get down wit they bad selves.

You'll also find the Golden Boot Plaque. This unique item will allow the owner of the house to select an unwanted guest and give them the BOOT. Before they know it, your party crasher will land in Battleon and they won't lnow what hit them!

This is your FIRST chance to get these items but you WILL be able to get them in the future!

DragonMaster Frostscythe is recieving the  new items as promised today, as a thank you to the members for allowing the non-members to play in your Frost area. Miltonius has worked all week on these new items including a Frostscythe Axe, Frostscythe Mace and Shield combo item, Frostscythe Daggers, Frostscythe's cloak and even a mini-Frostscythe pet!

You guys have made this the best Frostval yet for us and we'll be a little sad to see it end but it's not over yet! You still have a week before the road to Frostvale closes again for another entire year. Drink your MogNog, Sing with your friends by the fire and be merry! All good things must come to an end. uh... Next Week.

We hope you guys have all had a great holiday. We all took a little time out of insane production schedule to spend some time with our friends, family and loved ones but we CAN'T WAIT to get back to work on all new AQW adventures in the new year.

We plan on making 2011 our best year yet! HAPPY NEW YEAR!

Last Sock Of The year

Last Release Of The Year

And What A Year It's Been!

I'm sure I missed some stuff, and sorry for that, but I could keep writing this post all day!

Thanks to everyone for making this AQW BEST YEAR YET! Special Thank You to the Members for keeping us going. I know that not everyone can support the game with a membership, and every AC, AExtra and ad helps keep AQW running but Members are really the fires that keep the AQW engine running and we are SO grateful for your support. We promise to keep AQW Memberships the best value in gaming, keep listening to your ideas and suggestions and try to get as many of them in the game when and where we are able!

So What About This Week?

This week, we've got the return of the New Year's event with Icemaster Yeti and Lim! We will be re-releasing as many of the new-year's seasonal rares as makes sense (the 2010 New Year's Hat would NOT make sense) but we're also adding LOTS of brand new items!

House Items that DO STUFF!

Yorumi has been working his code magic and we're going to try and release a few MEMBER ONLY house items in the New Year's release! These items will ONLY work for the owner of the house. One will make everyone in the house dance, one will allow you to kick unwanted guests back to Battleon and if we can get it working we will add an item that will lock everyone out of your house except you and the people on your Friend's List (and mods, of course).

As promised, to make up for having to unlock Frostscythe for all players, we will be adding several new MEMBER ONLY seasonal rares to Frostscythe.

I did say that Quibble would be staying until the new year and this Friday is still in 2010 so you will STILL be able to get his items for this week AND Next week. Quibble is leaving NEXT Friday, but THIS Friday we will be adding a few MORE new items!

If he doesn't sell his entore stock he's going to break his spine carrying those items out of town after new year.

Speaking Of The New Year...

This Saturday is January 1st, 2011... that means that all the gift boxes from Tinsel and the Big Red Bag in Battleon will open sometime on Saturday, the day after this week's release. It could happen at ANY TIME during Saturday (based on the server clock, which is Eastern Time) so don't bother flooding the forums and my Twitter with "What Time Do They Open?!".

However, It's perfectly fine to flood Beleen's Twitter! Heh.