BOOM! *blast* The Hoverbase is under attack! And when you learn that one of your closest companions has betrayed you, you’ll have to take matters into your own hands to keep the both the SkyGuard AND Lore safe from harm!

What the Pirate says changes EVERYTHING!

Get ready to go deep into the heart of the SkyPirate headquarters, where you’ll face bloodthirty pirates, the DreamWeaver’s most precious victims and a villain who will take everything you thought you knew about this saga and turn it upside down! 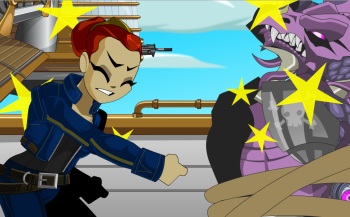 Don't mess with the SkyGuard!

But before you can learn about any of the shocking secrets and long-standing feuds, you'll have to go through the Chaorrupted SkyPirate General! 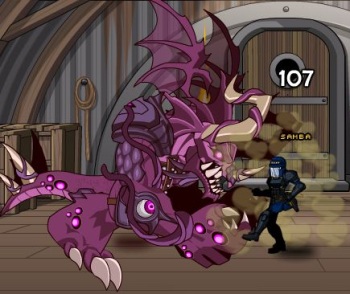 You'll want to do more than just SWAT at the boss. Take him DOWN!

The long-awaited Member-only SkyGuard Grenadier Class is LIVE! This class will ONLY be available to members. This week you can obtain it if you have rank 10 Skyguard rep, but if you want a shortcut AND you're a member, then NEXT week you can purchase it at Itzachi for 2,000 ACs! Check Cysero's Design Notes post for an in-depth look at the Grenadier Class skills!

Have a good week, everyone! We hope members enjoy this Member-only Explosion week! All member-content, all week long! And get ready next week for the 3-way Etherstorm War and Dage the Evil's Even-Eviller Birthday Shop!

Prisoners of the Pirates

If you can't trust your family, who CAN you trust?

Drip... drip... drip... Rusty brown water drips from holes in the corrugated metal ceiling of the crumbling bunker in the SkyPirate Base where the children are kept. The thin, unceasing sound drills into her ears and would eat away at her resistance if she didn't keep singing loud enough to drive it away, Nhia thinks to herself.

And besides, it helps Jarren stay strong, too. And she would do anything to protect her little brother. Especially after the last blow from the Pirate as he brought in their breakfast. She can still see the bruise staining Jarren's cheek, spreading and growing darker as the morning passes. He didn't cry when the cuff came, and he didn't fight back.

It's too fine a line, she thinks, between not showing fear and not showing defiance. She doesn't know how long they can keep treading it.

"Nhia? Nhia? Nhia Nhia Nhia!" Jarren rapidly tugs at her ragged hem from where he crouches by the bin.

"What, Jarren? What do you WANT?" Nhia snaps, immediately regretting the harsh tone as tears well up in his eyes. What the Pirates couldn't do to him, she has, and she promises silently - again - to do better by him. To get them both out of this place.

"When ith Gramma goin' to tell the Pirates to let uth go? I dreamed of her latht night again. She wath holdin' me and thingin' to me like a Gramma thould do." Jarren's lisp only comes out when he's confused or scared, she knows. 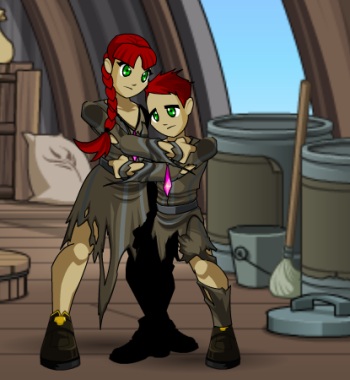 Nhia pulls him to her and hugs him tight. If their own mother is too afraid to protect them from the DreamWeaver - she refuses to call her Grandmother - then she'll have to do it herself. But maybe... last night's Dream comes back to her in a rush.

"The DreamWeaver never held you like that, Jarren. She only makes you think she has. You've got to stop believing in her! We are nothing to her but tools to use, garbage to give to those filthy Pirates to make them think she'll keep her word." Her voice is harsh again, and she fights to soften her tone.

Jarren looks up at her, his eyes searching her own for an answer she can't give, a promise she can't make. She gives him the only comfort she can:

"We won't be here forever. I can feel it, and I Dreamed it. Something is going to change, someone is going to come, and it's going to be soon. We can hold on, Jarren. We have to." Nhia draws a deep breath and finishes.

"Dream of tomorrow's tomorrow. Hold the picture in your mind like Momma showed us. We can make help come. This nightmare has to end sometime!"