Deep within the Temple of DoomWood

(SPOILER ALERT: If you are not caught up in the DoomWood Saga do not read!)
Last we left off in the DoomWood Saga, Artix (Hey, that is me!) escaped from the prison of LightGuard Keep (Which *coughs* you put me in without telling me why.) to find and battle the PaladinSlayer Vordred. Meanwhile, you went to the Necropolis and discovered that Noxus, who had been defeated back in DragonFable, has been brought BACK as a Lich (A lich is a very powerful undead wizard -- remember, Noxus was actually alive in DragonFable) by the new Necromantress, Sally (Wearing her terrifying pink Necromancer robes). With three major villians focused on turning our world into a barren undead wasteland... things are looking pretty grim. We are not sure why we are supposed to keep Artix (Still me! So wierd talking about myself in the 3rd person) away from Vordred... other than Vordred is an evil PaladinSlayer who will apparently gain unbelievable powers of darkness if he slays Artix personally. 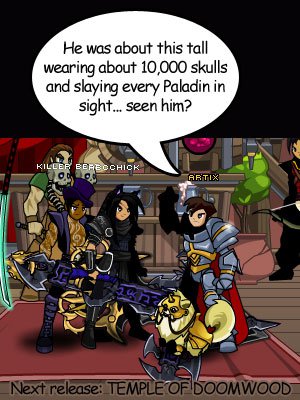 Considering that Vordred, the PaladinSlayer is immune to all light based attacks, we all believed that he was certain to effortlessly slay Artix if he found him... but now we think there may be another reason we need to keep Artix away from him.  In a very confusing twist, Vordred identified that Artix's Axe (The blinding light of destiny) was in fact, NOT light-magic based and mentioned something about Artix not being able to cast light based spells on his own. Then we watched in horror as Vordred corrupted the Blinding Light of Destiny into his new personal weapon...  (Did I mention things looked Grim?) Tonight you will brave an old school dungeon crawl to the bottom of the Temple of DoomWood, defeat a Dracolich (there are rumors that two are down there) and learn a secret that no human was supposed to ever know! (If you are not human, then I guess it is ok for you to know it.)