The War for Frostval

Fight to Save Frostval - or Destroy It!

Tonight, a darkness descends over the land and threatens to destroy Frostval - a darkness named Dage! As a Hero of Lore, it's up to you to fight the forces of evil and save the holiday season! Or, if you're loyal to Dage, you can help him turn winter into the season of bleakness and despair that it was always meant to be. 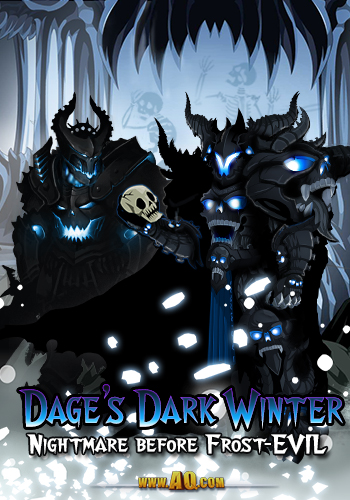 Dage just has a different way of celebrating!

There are two ways players can fight in this war. When you /join darkwinter, you'll be able to join a special PVP map, where you can battle other players to save (or destroy) the holiday season! Or, if PVP isn't your thing, completing quests for either Yorumi or Issik the Vile will also help fill the war meter.

Step it up, Evil! Good's kicking your butts!

However you choose to fight, you'll be collecting the souls of the good (if you're evil) or evil souls (if you're good) that can be used to buy items in the Darkwinter Good and Evil Merge shops. But there's a catch! We'll be adding new items to both shops each day, but only the winning side will be able to unlock access to their shop's items! 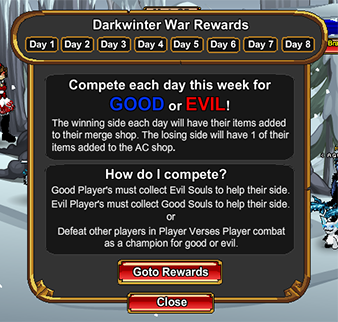 Here's how it works.

But don't panic. The meter will only be tracking daily progress, so it will reset every day to give both factions a fighting chance at the loot. So if you lost yesterday, you can still win today! And even if your side loses, don't despair! You'll still be able to buy one of your daily items for ACs at the end of the event. (On days that have more than one item, that means the second item will be gone forever!) 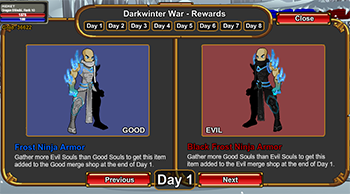 Some of the merge gear you'll fight to unlock!

Members of Dage's Legion will be able to purchase this awesome holiday-themed Dage gear for a limited time! 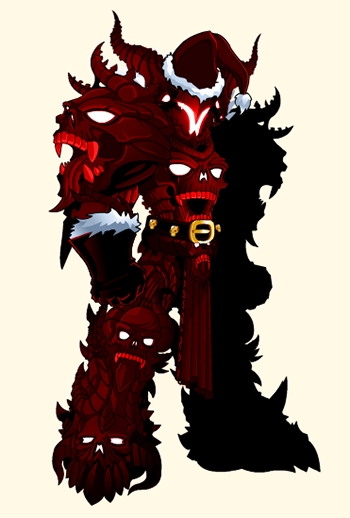 There is SO MUCH happening that we couldn't release it all at once! Here's what comes out later tonight: