Dage's birthday isn't until Sunday, but he's decided to start celebrating tonight, and he's got plenty of evil goodies to share with everyone! Log into Battleon tonight and talk to Dage to open his Dark Birthday Shop. The new Blademaster class and Blademaster weapons are live now, and more new Legion gear - including a new quest pet - will be added on Friday. And don't forget, Dage's big birthday celebration is coming next week! 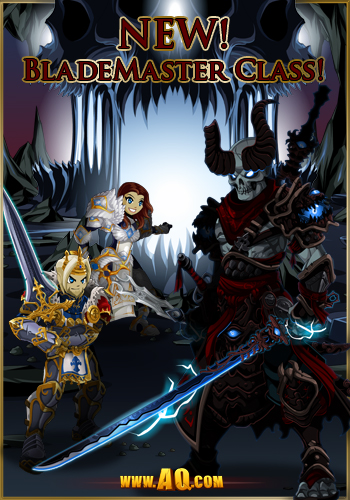 Battle your way to the SoulForge, where Dage the Evil waits! Last Friday, we celebrated his birthday with the release of a new map, many quests, and a ton of the darkest, most impressive gear yet!

But so MANY souls have been pouring into the UnderWorld to ally with him, that Dage's power has increased. And this Friday, he will craft deadly new RARE weapons using the SoulForge and offer them... to YOU!

Join the Legion and know victory!

The new Paragon Pet had TWO Legion Token quests added to it earlier today, but you MUST have the Undead Warrior Armor AND the Ascended Paragon Pet in order complete them! 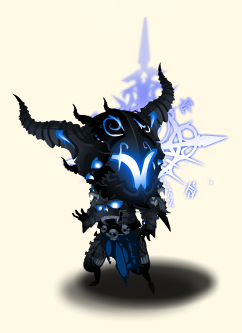 Upgrade with any membership or purchase any AdventureCoins for a limited-time to unlock the color-custom StormBringer Set! We're celebrating the release of our new in-game payment system by making this incredible set by Tyronius available to any Hero who supports AQWorlds!

If you haven't checked out the new in-game payment feature, it's just a button-click away! It took a large chunk of the AQW team a number of weeks to get this functionality live, but we think it's worth it! (A lot of you are saying it's a much easier, cleaner interface to use, and making that was our goal!)

The "Just For You!" tab appears if you're eligible for a special upgrade offer!

Click any "Get Membership or "Get ACs" button to open this window straight from the game. You'll be auto-logged into the payment site and, if your account is linked and you have Artix Points, you'll automatically be able to use them to pay!

Who will YOU fight for?

Fire, Water, Wind and Earth… and Desoloth! War has come to Etherstorm and the DragonPlane! Choose a side; fight for Good, Evil or Desoloth in AQW’s first 3-sided war and battle to decide a whole realm’s destiny. The winning side will determine Desoloth’s fate… and affect the end of the Chaos storyline!

The Cor Draconis is the heart of the DragonPlane.

Make sure you’re up to date in the Etherstorm storyline to understand everything that’s happening, but if you aren’t caught up, you’ll still be able to battle. (You’ll just be a bit confused at some of the life-altering events that have happened to the characters!)

What did you do to make Omom so ANGRY?!

The choice is yours, Hero! Will you fight for Good, Evil or Desoloth? Only ONE side can win this war, and whichever one does will determine Desoloth’s fate… and will have an impact on the end of the Chaos storyline in the future!

Dragons. Magic. What more could a fantasy-loving game player want? Loosely based on the class from AdventureQuest Classic, we’ve given the armor and skills an epic AQWorlds twist to keep things fresh and unique!

Check out Thursday’s Design Notes post from Cysero to get an idea of the Dracomancer Class’s skills! On Friday you’ll be able to purchase the class from Itzachi in Battleon for 2,000 ACs or from any of the Etherstorm Priests if you’ve achieved rank 10 in Etherstorm rep!

And MEMBERS can now purchase the SkyGuard Grenadier Class for 2,000 ACs, as well! Talk to Itzachi in Battleon!

One of the BEST things about wars is all the awesome rewards, and the Etherstorm battle won’t be any different! We’ve got a host of excellent war merge rewards, and each sidewill have its own gear to earn! But don’t worry, if you like the look of another side’s rewards, YOU can earn them, too. You’ll just have to battle that side’s monsters to earn the required merge items!

Both Solrac and Dage the Evil had birthdays this week! To celebrate, Dage has released a special Evil Deathday shop in Battleon! You’ll be able to get the following gear, whether or not you’re a member of the Legion. But if you HAVE gone over to the Dark side, then you’ll be able to purchase the extremely rare Paragon pet for 2,000 AdventureCoins!
The Evillest Birthday shop:

Thanks for this absolutely ACE shop go to Herzer Herring, the latest winner of the I Can Has Mod contest! She selflessly wished for a shop to celebrate her home country. That means blokes and shielas everywhere can get these non-member, spiffy prezzies for gold by talking to Mick Dundoo in BattleOn!