Before tonight's brand new AQWorlds release with Trolls, Horcs, Quibble Coinbiter and one of the most wicked armors ever to be seen in the game.... I would love to tell you a little about what has been going on behind the scenes*. Specifically we are starting to use "cloud computing" for parts of our game network. Which is sorta funny.. because, from your perspective your AE games and characters already live in a "cloud" which can be accessed from anywhere you go in the world. 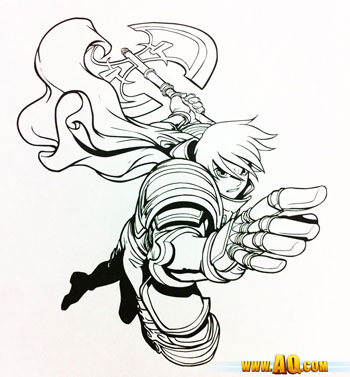 As you know we moved to Secret Underground Lab #4 a few weeks ago. There is a GIANT bell that rings and plays songs every hour (Including a tune from the Godfather and the soap opera "The Young and the Restless." - I WISH I was maiking this up.) So, Thyton decided that EVERY hour of the day, when the bell rings, we all go into the hall and do pushups, situps, and whatever crazy workout he announces* *. In fact.. it JUST went off... BRB. <pause> Back! Each day the workout has become more... um, intense. We started using weights. But some people do not have weights. So we use the heavy boxes full of the AQ Novels from HeroMart and started lifting those. How badly do you want me to post a video of this for you next week***?

** If Thyton keeps this up we will have to change our slogan to "Our game developers can beat up your game developers."
*
** Not to be confused with the video of me waking up in the morning that I accidentally linked instead of Twitter a few minutes ago (Embarrassing! Fixed!)

Did I really change the name on EVERY CARD?

It is a random trivia fact that Miko & I used photoshop to create the cards that are now available in U.S. based Target and CVS stores. Some people believe crazy marketing experts create all of the stuff hanging on store shelves... nope... just us. (We do everything ourselves, even our TV commercials.) But, LOL, each time we made a new card we changed the name on it! It started with AdventureQuest, then AdventureQuest Worlds, then BattleOn Games, then Artix Entertainment. There are now 8 versions of the cards floating around out there in stores! The last version with Artix Entertainment is going to be our final one. (Seriously!) But we wanted you to know that literally all of the different cards now work with ANY and ALL of our games.  Each card will work with any game, even if the game is not listed on the card. Including AQWorlds! So, if you happen to be writing a letter to Santa or some other magical gift-delivery expert, you should probably phrase it like this: "Dear INSERT NAME HERE, I would like a pre-paid card from a store that says either AdventureQuest, AdventureQuest Worlds, BattleOn Games, Artix Entertainment or um... or is in any way usable with AE games." Be sure to say please and leave milk and cookies out. (Bear trap is optional.) 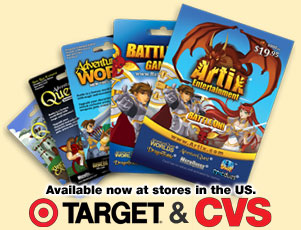 Forum/Twitter/FaceBook Question: Have you ever seen one of our cards in a store? (Bonus points if you used the card as a clever way to meet a cute girl/guy "Oh yeah.. I know the guy who made this. I message him online all the time. Hey... you know what, we should totally go slay the Red Dragon together some time.)