You managed, against all odds, to save all SIX major AE games, including AQW. You have unlocked a guided tour of the AE Secret Underground Lab. If you speak to Artix then you will see that you have also unlocked this year's Birthday Rare Class, the Chunin Class. 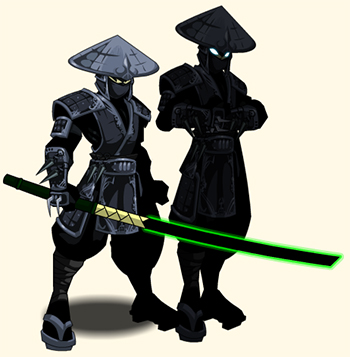 Artix, located in the underground lab map will give you the quests you need to earn the class and also has the merge shop where you can buy them. There are no dailies this time, just a little effort and you can earn the class as fast or slow as you want! Members get the added bonus of being able to earn the class  THREE TIMES faster than non-members.

Just REMEMBER, the chance to earn the class is a special bonus for those of you who were here to help celebrate AQW's 4th birthday and AE's 10th! Once the birthday event goes rare in 1 month, then you will no longer be able to earn the class. Don't Worry. 1 month is PLENTY of time for anyone to earn it.

You will need to turn in the quests and re-accept them every time. We've been forced to take this measure to help combat botters so you can thank those people if you find that a little annoying.

Now let's talk about the class a little.

The Chunin is a higher rank of ninja than the average ninja (genin). Please don't start talking about Naturo... this is drawn from the REAL LIFE ninja ranking system. Naruto just got that right. In a very quick Twitter more people wanted a multi-attack class which was what we also gathered from various threads in the AQW forum discussions. It also seems to be the general feeling that we haven't released enough Warrior/Melee based classes lately so the Chunin is a Warrior based Multi-Hit class.

It's designed to be GREAT at farming, interesting in PvP and still able to solo a mid-level boss if you play it smart. Combine this with an XP Boost and It should help a lot of you reach level 50 VERY quickly. There was request to take a break from stacking auras so this class is SUPER SIMPLE to use, recalling the bygone days of the base classes.

As it's Warrior based class I suggest WARRIOR Enhancements. It's also based on the Warrior regen model which is a little counter-intuitive with a class that uses it's dodge and haste reduction to survive but it's been balanced with that in mind. Plus, there are always potions.

Hits up to two enemies, showing them greatly for 4 seconds.

Decently strong attack, very cheap and very straight forward. You hit then, they take damage and you increase your survivability by virtue of the fact that at least 2 of your attackers are attacking more slowly.

Hits up to three enemies for moderate damage, reducing all of their chances to hit greatly for 6 seconds.

In testing and balancing I found this to be my go-to power, especially in PvP. You hit them, it does slightly more damage than the first power while still being relatively cheap AND increasing your survivability by virtue of the fact that at least 3 of your attackers are now have a 50% LOWER chance to hit you and your allies for 6 seconds.

Hits up to two enemies near you dealing moderate damage. This attack also has a 50% chance to reduce their next hit to 0 Damage.

Again, straight forward but an interesting possible bonus effect. Hit 2 targets for decent damage and increase your survivability by virtue of the fact that at least 2 of your attackers have a 50% chance to do 0 Damage on their next hit. This comes in really handy in a boss fight and have some REALLY interesting effects in PvP as you have the ability to reduce a foe's nuke to 0 if you are lucky and time it right.

Increase HASTE by 5% AND Increase DAMAGE OUTPUT by 15%

This is where things get interesting. You've probably realized by now that this class is designed to debuff the enemy and survive even without any heals. Haste increases your Damage Per Second by making you attack faster, and a flat 15% increase to your damage across the board is HUGE, but we balance out this new strength with an interesting weakness. You are squishier and easier to kill, IF they hit you... All the more reason to NOT LET THEM HIT YOU.

You focus your chi into a quick and brutal attack, hitting up to three monsters around you for high damage with a small chance to stun them. Using all of your chi in a single attack also leaves you stunned and open to attack for 4 seconds.

This is a weapon of last resort. It's very handy while farming, and an interesting tactic in PvP. You can nail up to 3 enemies and you might even stun one, two or maybe even all three of them BUY you have a 100% chance to stun yourself for 4 crucial seconds in which you open yourself to all attackers. Avoid this in boss battles unless the boss summons minions (function to come?).

Rarely, the spirits of your ancestors flow into you increasing your haste, dodge, mana regen and health regen greatly for a short time.

This is a GREAT rank 10. It turns you into SuperNinja for 10 seconds. You get a small HoT, Your mana regen increases, you become virtually unhittable AND you start attacking on fast forward. Don't count on seeing this happen a lot, but when it does, it's REALLY FUN!

So there you have it! The Chunin Class in all of it's glory. Have fun and stay alive!

Every player has been given a bonus 200 Thank you ACs for our Birthday. We are currently going through ALL the games and giving everyone who helped win the war some in-game currency in all six on AE's Core Games.

62 days until Just Another Day