This Friday: Nythera, the hard-working half-dragon in charge of AE Player Support is getting married this weekend and and you're all invited! 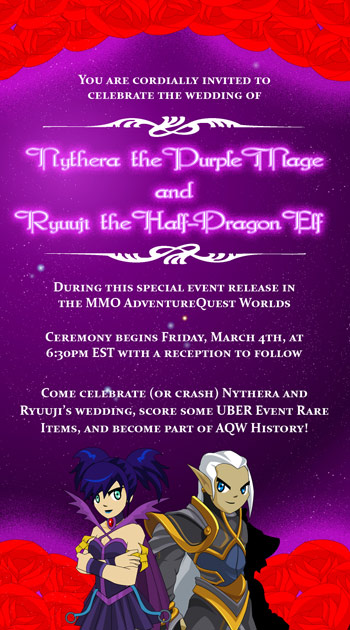 About 1000 years ago, The Purple Mage's parents arranged her marriage to Ryuuji, another very magically talented half-dragon. Just one problem... Nythera has NO interest in getting married, no matter what her parents agreed to.

She thinks she can get out of the marriage contract promising her to Ryuuji but she will need your help and Ryuuji will stop at nothing to win her heart.

As promised, there will be a number of rare items including (but not limited to) some AC rares and since so many of you have been asking for it through e-mails and tweets, the Violet Eternal Flame back item will be one of them.

Much like my wedding event, Nythera plans on getting married just once so this is literally a once-in-a-lifetime event. Don't miss it. Come and help us celebrate and if you can't make it, please stop by the Forums and wish her good luck! :)

Tomorrow, March 2nd is Dage The Evil's Birthday and to celebrate he has decided to come to Battleon and offer you some of his items, including the highly anticipated Dark Caster armor! 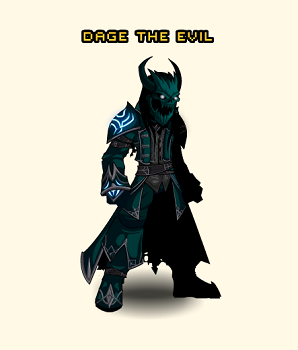 For you Dage The Evil fans, this will be one of the only times when you can grab a few of his items for gold/ACs instead of buckets full of Legion Tokens. These items will ONLY be in game starting tomorrow March 2nd, until Monday Mar 7th. The shop will open sometime during the day.

Dage has requested that the armor price be set to 2000 ACs as he has previously mentioned over Twitter. I just don't want anyone surprised by this.

There has been a lot of recent discussion about bugs and I wanted to adress these concerns and also ask for additional help from you guys.

Some people are concerned that they haven't seen any progress on some of our bigger (actually huge) ticket items. Specifically Guilds, Name Changes, Gender Changes and PvP improvements.

Please understand that each of these projects are fairly big to enormous and require a LOT of time and effort on behalf of the entire team especially considering that we release new content every week, and not just a hat or two but usually a full adventure with music and at least one animated cutscene.

Even comping up with a concept for an easy and fun way for you guys to build and run YOUR OWN guilds while keeping the game family friendly is a challenge, much less the back end.

Name Changes require changing the entire flow of the Login process to require a Portal Account  among other things, plus deciding how far back to go and sieze names of innactive accounts which is bound to make a few returning players mad.

PvP is a constant pain, which requires real-time positioning (so you see your enemy where is, instead of where he sees himself so you're not attaching his ghost image whule he wails on you from behind. It's a lot more calls than normal positioning within the game (except for the Ledgermayne battle). Balancing PvP against PvE (Player versus Environment) is an uphill battle that every MMO has to come up with a solution for (and the most popular MMO on Earth still struggles with) especially in trying to keep up with player demand for new classes, which is one of the most constantly requested game additions.

Lag. It's like snot. Everyone has it and, no matter what you do, it is sometimes unavoidable. Making a Flash based MMO gives us the power to reach a LOT more people than we ever could if we made a console RPG or an MMO that required a client download. A very large amount of our players play from internet cafes and librarys. Unfortunately Flash has some drawbacks and one of them is that it's very prone to lag, but some of it also comes from older computers, slower browsers, intermittent internet connectivity due to the ISP or a wireless connection and some of the lag comes from the servers as well. I'm sure you've noticed how hard it is to log in after a restart. That is because everyone is trying to crowd into the servers at the same time and just like a real door... it gets clogged when everyone tries to run through at once. We are always fighting lag and we are really sorry for the lag you experience.

Each of these items presents their own unique challenges plus keep up with our weekly release bugs and some of those are game-crahsers.

Here's where you come in... WE NEED BUG REPORTS. Everytime we get a bug report we try to replicate it to see if it was a real bug that we can track and fix or just a code-hiccup. We go through the bug reports for EVERY release in GREAT DETAIL and try and fix every bug that we can duplicate, but we can't fix the broken bits of AQW without your help.

Please, when you encounter a bug go to the AQW Bugs Forum and REPORT IT! The more details you can give us the faster we can get it fixed. There are sections for just about every kind of issue you can imagine and without your detailed bug reports, we don't know that they are there.