The Temple of DoomWood Awaits!

In these Ruins, You're DOOMed!

Crumbling ruins. Whispers of children laughing. Shadows twisting through the columns. The Temple of DoomWood is not a comforting place, though in its past it was a lively and well-loved center of Paladin activity. That is all gone now, and only the blasted holes leading into dark recesses remain.

You know what that means: DUNGEON CRAWL!

A lone guardian waits, but he is not human. A paladin turned to stone by a skeletal geomancer is the only watcher in this wasted area. He will share with you secrets and send you on a quest to the bottom of the temple, hunting information about Vordred, Artix, and the epic battle between the elements of Light and Dark!

Last Friday we changed the color palette to include new colors in a much more aesthetically-pleasing layout. (Thanks, HeroSmash!) Many of you noticed the bug that rolled live with this feature modification in which all the OLD colors disappeared. 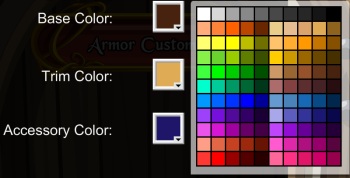 An update to the update: bug-fixing the new palette!

This week we're fixing that! We're going to make sure that all the OLD colors come back and that the NEW colors stay there, and they will all look as nicely ordered as they do now. This is a high priority fix because from reds to blues and #FFFFFF to #000000, the color palette in AQWorlds lets YOU look like the Hero you've always known you are!

Chaos Shaper class!
We've gone back and forth- and asked you guys what YOU think- about what reward we should give for the 15 month membership bonus. You guys weighed in on Twitter and the forums, and here's what we've decided:

The 15 month bonus class will be... the Chaos Shaper class!

This will be a class unique to AQW, and it will be completely, chaotically awesome! The skills will do some major damage but- user beware- some of the effects will be a little... unpredictable. That's to be expected when you're handing raw Chaos, after all!

No SoulWeaver class
We know MANY of you wanted the SoulWeaver class, and we really wanted to add that in, too, but a few key problems prevented us from going forward with that plan:

There is a POSSIBILITY that at some point in the future we can tell a whole NEW story involving the SoulWeaver class (man, do I have ideas! Ideas that take the DragonFable story and go beyond it), but that is not a promise. It IS something we'd like to do, though, so don't give up hope!

We're raring to see you guys relive the good ol' battles you powered through when it was first released back in the days of the original AdventureQuest!

Have a great week, and look for more Design Notes in the next day or two with sneak peeks of art and storyline work that will release this week!