A Moment of Cheer and Maya

With the holiday hype machine raging across the internet, if your online life is like mine, you're inundated with countless emails from all corners of the globe telling you to get this, watch that, don't stick that in an outlet (!!!)... It can be easy to get overwhelmed. To combat that, here's a really awesome, chill picture of Loremaster Maya and her moglin friend created by the incredibly-talented AQW artist, Crulon! 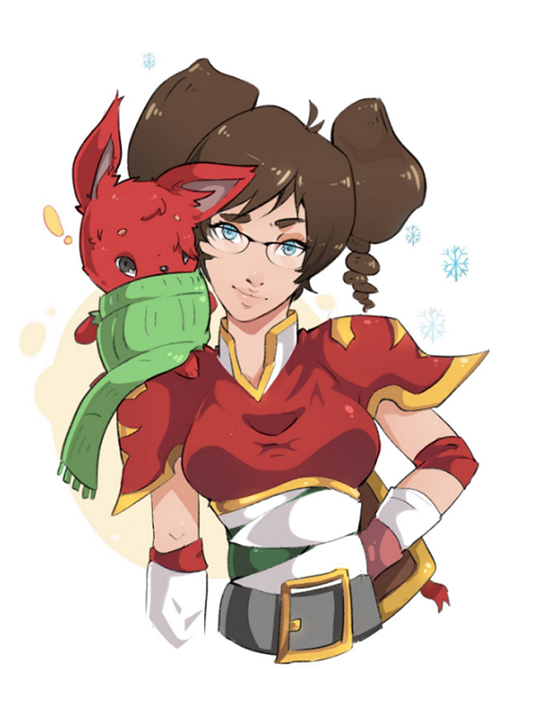 Feast your eyes, rest your mind, and ease your heart...

Then prepare to unsheathe your blades because OMG do we have a lot coming for you this month! But I'll hold off on more news of that until later today. For now, stare at the pretty lady and chilly moglin and be at peace. War will come soon enough to Lore!

Head to HeroMart to reserve yours now!

A new year approaches, and that means it's time for a brand-new Calendar to arrive at HeroMart. This year's new calendar features digitally painted artwork inspired by our newest game, AdventureQuest 3D, and its theme is "Year of Adventures." Given everything we've got planned for 2017, that sounds about right! 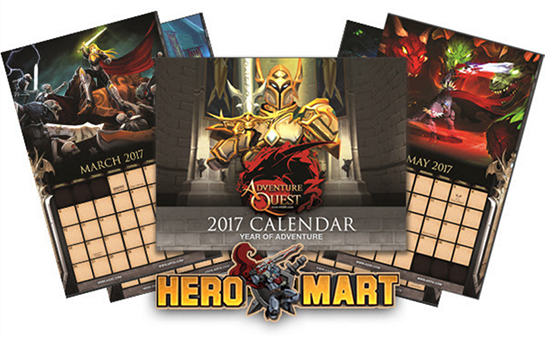 The entire team was so excited about how cool this year's calendar looks, that EVERYONE wanted to get in on the reward action! That means you will unlock in-game rewards inside AQ3D, AQWorlds, AdventureQuest, DragonFable, and EpicDuel!

To celebrate this brand new "year of adventure" the calendar includes our first ever revision of the original CHRONOMANCER ARMOR for AdventureQuest 3D! 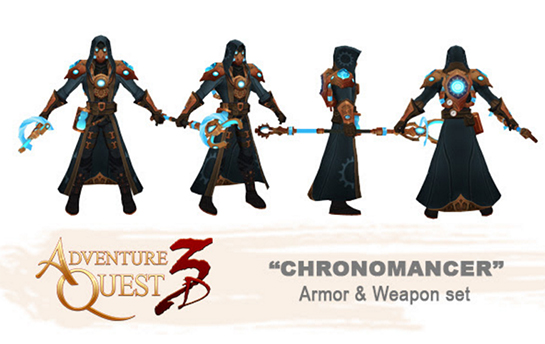 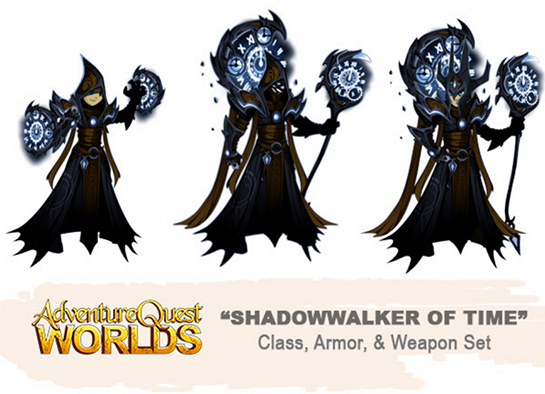 The DragonFable and AdventureQuest teams are planning to release their classes for calendar buyers in early 2017. (To any time travelers out there... let me know what the release date turns out to be!)

For those of you SUPER collectors, we've got a really sweet treat this time around. The Collector's Edition includes a limited "Dragon Slayer" Collectors print as well as a signed copy of the 2017 calendar!

What IS a Shadow Walker of Time, you ask? Good question! These intrepid, timely explorers can step into a shadow in one time-stream and emerge from a completely different shadow in another time stream.

A strong defensive skill that takes a short while to build up. Your opponents will struggle to land a hit with their Hit Chance reduced by 15%. If you’re in Temporal Eclipse mode it will further your defensive ability with increased dodge chance. Considering you lack consistent heal, this will be vital to keeping your health in check.

Your bread and butter skill. Helps get the damage train going and applies your only heal while you have Temporal Eclipse. Not to be overlooked.

This class is strongest vs a single opponent and Vendetta is the reason why. A 20% damage boost vs all sources means you’ll be a hit at parties and the opponent will be taking hits like a pinata.

Sacrifices your life force to constantly warp through the shadows, increasing your dodge by 300% for 4 seconds and dealing damage to up to 3 foes while focusing their attacks onto you. If Temporal Eclipse is active, strikes from the opponent's shadows for Moderate Damage to up to 3 enemies and healing 30 mana after 2 seconds to the caster. Costs health after 2 seconds.

You lack heal, we get that, but this class isn’t about healing. It’s about being in the shadows, dodging, lurking, striking fast and hard and when it’s least expected. 300% dodge for 4 seconds. You’re practically invincible to everything. In PvP, if you know your opponent well, hit this right before their big nuke, slip into the shadows and come back blades a blazin’.

Emits total darkness applying Shadowed state, lowering up to 3 opponent's Hit Chance and negating their Crit Chance by 30% for 5 seconds. You access new abilities as you warp through the shadows applying Temporal Eclipse, increasing your hit and crit chance by 80%. Lasts 5 seconds. If Chaos Rift is up, applies Turbulent Rift, doubling your haste but increasing the damage you take by 20% for 5 seconds.

Your ‘berserk mode’. Hit this and get ready to spam your skills. Use Shadow Warp to replenish mana, Devour to heal up and Umbral Stigma to deal the killing blow! Be careful though, as you will almost definitely have Chaos Rift up (unless you open with Temporal Eclipse *hint*). That means you’ll be taking 20% more damage from all sources for 5 seconds. Hit Devour often for that sweet heal and make sure your autos are landing to get the dodge buff to neutralize any additional damage you would be taking.

Get up to 50% more FREE Adventurecoins!

From RIGHT NOW until January 6th, buy any Adventure package and get up to 50% more FREE bonus ACs! 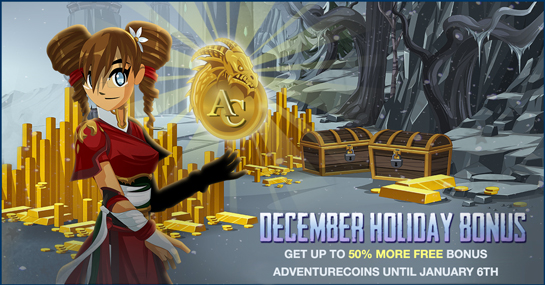 The bigger the AC package you buy, the more free AdventureCoins you'll get!

* Note: bonus AdventureCoins are only available with AdventureCoin packages. The special bonus offer does not apply to membership packages.

To help concentrate players onto the testing server, over the next few days, we will sporadically be turning on a TRIPLE boost to XP, Rep, Gold, and Class Points on the following servers: 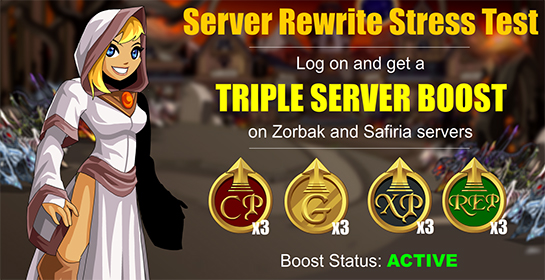 The boosts will be active for a couple hours at a time as we monitor the data. Log on and battle, and once you see the Server Message saying the boost is active, call all your friends and let's fill the servers as MUCH as possible!

The Nythera, Alina, and Cysero testing servers have been hidden to help concentrate player populations onto these servers.

The boost will return Sunday afternoon. Watch these Design Notes and my Twitter for boost status announcements.

Limited Time Rare Drop... only on the test servers!

If the triple boost isn't enough incentive for you to log onto the test servers... now you've got a RARE ITEM! Enter Zorbak or Safiria servers until Tuesday and battle the Lesser Groglurk in /marsh2 for a chance to get the Black Blood Blade until Tuesday! 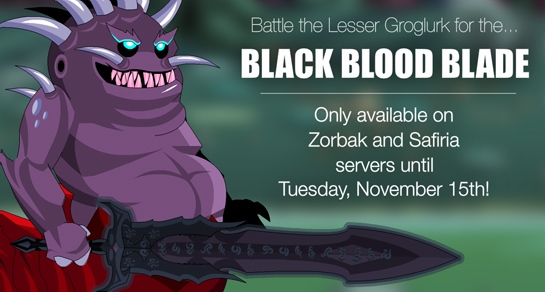 Update: right now, there is a bug on the testing servers (thanks for finding it, guys!) with reward drops - the rewards are not dropping for everyone in a room at the same time. This bug will be fixed on Monday.

You *can* still keep farming for a chance to get the drop, but because of the bug, we will extend the leave date until Friday.

InfiniteAE says: "Not gonna lie, I'm really blown away (amazed) on how FAST the test servers have gotten! Keep it up! I have lots of faith!"

Tyler: "Thank you for the triple boost! I didn't realize how fast the PTR servers are! Holy!"

vοrτεχrεαvεr: "The response time when transferring items from your inventory to your bank is incredibly fast!"

What To Do While Testing: Report Bugs

If you find any bugs while battling on the testing servers, please make sure you report them to the Bug Tracker at www.Artix.com/bugs

PS: click this for a sneak peek of some of the Black Friday gear coming later this month! (Unless you don't like spoilers. Then... carefully do NOT click!)

Time to /Party and Battle On!

Hi, guys! October is a CRAZY month here at the Underground Lab, and for the members of the Artix Entertainment team. So many of our games have their birthday events, and many of our team members do, too -- including Cysero, Rolith, Ai no Miko (who's birthday was yesterday!), and me. It is hard to believe that another year has already passed, and it's time to level up again...in real life! 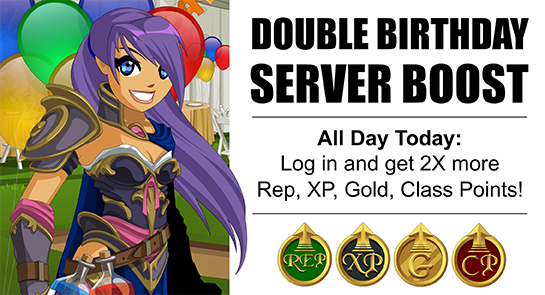 I want to thank you all for helping make the past year an AMAZING one for me, the AQWorlds team, and everyone at Artix Entertainment. Please enjoy a 24 hour DOUBLE server boost as my birthday/thank you gift to you!

* Add in wedding anniversaries AND Halloween and it turns into one long month of crazy, non-stop /partying!

Time to /party and Battle On!

Read on for more information on HeroMart Changes!

Please see the post here for the latest information on HeroMart and HeroPoints!

Hello and happy Monday night, heroes! After bowing out of Friday's release due to illness (man, I hate doing disappearing on Fridays, but thank you all for the well-wishes!), I am back and full of good tidings to share!

Get Your Two FREE HeroPoints!

Help Stryche celebrate the grand opening of the in-game HeroMart location by completing his quest for two FREE HeroPoints! Once you've gotten yours, you can spend them in his in-game merge shop.

His quest is one-time only, but you can always get more HeroPoints when you buy merch from HeroMart.com! Currently, the only item that comes with HeroPoints is the new AQ3D shirt, but more HeroMart products will have them in the future!

Note: if you bought any HeroMart merchandise in the past, please make sure you check the inbox of the email that was used for the order, as you (or your parent) got an email with a code for exclusive, free HeroPoints! You can redeem those AND do Stryche's in-game quest for the two free points!)

MORE good news! The Class designers and balancers, plus Artix and I, watched your feedback and requests all weekend long! By the end of the day Saturday, the designers were already brainstorming on how to improve the class!

In the interest of not releasing a too-overpowered class, the designers created a class that had room for improvement. We always want to listen to your feedback to make the classes what YOU want them to be and now, with the changes made today, it will be.

Those changes are coming (or may already be live O_O), and you can see the full list here!

After speaking with Arklen, the head of our class design and testing team, we are also going to shoot for bringing back the "member preview for new classes" perk in the future to help get MORE feedback before it releases to all players.

Players have reported changes to several classes (like Abyssal Angel), saying they are doing less damage than before. Adjustments to rebalance those classes rolled out slightly early - on the new server, those are actually BUFFS, but with the current server, people are experiencing lower damage levels.

The other classes on the "to rebalance" list will be adjusted after the server rewrite, since the effect is too dramatic to release on the current live servers.

Speaking of the server rewrite...

Good news! The server rewrite itself is done BUT Yorumi estimates he has maybe a week left of client-side bug fixes. (Unless something goes unexpectedly awry... which CAN happen *eyes the server hamsters*)

He has been making steady progress on those 20+ bugs fixed last week alone! (Thanks, testers and player-testers!!)

For everyone asking about the PTR Sir Ver Bank Pet... you'll need 150 Quest Mission Sprockets to create your very own PTR reward! You can get these by doing ANY of the quests on the PTR Testing servers.

Make sure you report any bugs you find on the Bug Tracker!

Valencia and the Hunt for the Sanguine Garnet Change

Valencia and her adventure in Darkovia have disappeared temporarily while we relocate it. Expect to see that adventure reappear later this month, based out of the Museum in Battleon town!

Take on the Reflecteract Now!

Congratulations! The Reflecteract war boss has just been unlocked! Talk to Anubyx for the boss quest and story cutscenes, then take on the boss for a chance to get its reward drops.

The boss has a chance to drop a pet or cape version of itself, PLUS the Reflected Commander armor set has been added to the war merge shop!