Friday: Return of the Special Events

The "Collector: Vindicator of They" and "Dage vs Nulgath War" Events Return!

Last week, we said we would be releasing Artix's Living Dungeon event this Friday. But when I checked in with Dage this morning, I found his chair filled by a skeleton. That was the first sign of trouble. When I got ahold of J6 and Ghost, they said that Artix's event is going to be INCREDIBLE!!! But it is also going to require way more new art than originally anticipated. 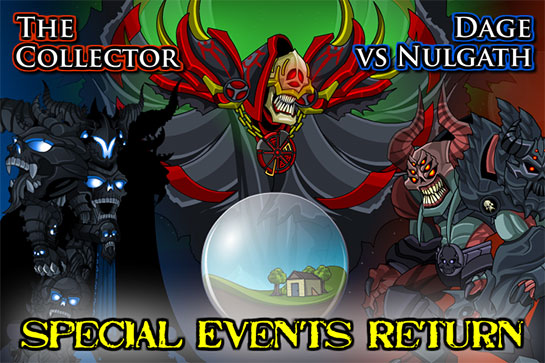 We do not want to rush this release, because what Artix has written sounds amazing. So after finding Dage the Evil, we surrounded Artix and persuaded him to delay the release until next week. (It really was not that hard; he wants this to be as excellent as we do.)

So instead, we are bringing back of AQWorlds most popular events: the "Collector: Vindicator of They" and "Dage vs Nulgath War"! These releases will bring back the old maps, cutscenes, and quests (including the super-bonus rep farming quests from the Collection map) but NOT any of the rare items from the previous releases (so do not worry, rare collectors)! 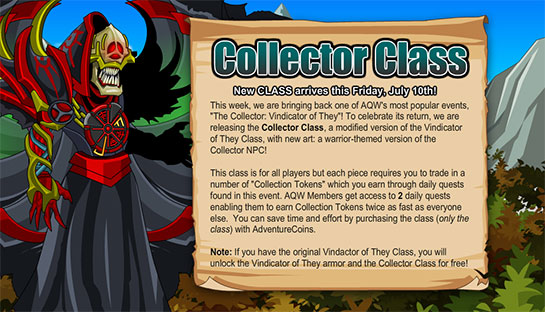 Nulgath is creating a new Terminator Genisys-themed armor set, and Memet's crafting an all-new look for the Collector Class art! You'll be able to unlock the PvE-centric Collector Class for ACs or through a daily quest but IF you still have the original Vindicator of They Class, you'll get it for FREE!