Behind the Scenes Story

Over at www.Artix.com we have been working on a browser based 3D MMO under the codename "AdventureQuest 3D" A few months ago, in a caffine induced moment of lunacy, I said something like "How cool would it be if we announced the real name during a live puppet show!?" So when we got close to naming the game... one of my many friends on Twitter (JOIN US...) reminded me that I said that. Cysero said, "I was just thinking that we don't do nearly enough puppetry around here!" So... despite being one of the weirdest, most chaotic, potentially embarrasing and regrettable things we have ever done... this is happening. Tonight. at 6pm EST streaming video from the lab live inside AQWorlds. 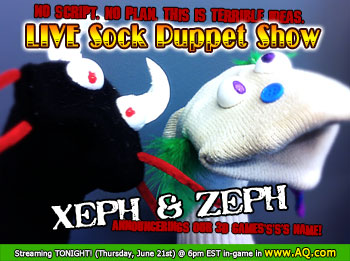 Cysero created all of the sock puppets using his spare left socks (maybe yours?) and a hot glue gun. We do not know who is going to play the girl sock puppet yet. We do not have a script. We do not have a plan... other than, at some point... we should probably announce the name of AdventureQuest 3D. On a side note... AQWorlds is our biggest and most popular game with the largest team of any of our games. AQWorlds will continue to grow and get better each week. The new 3D game is being created so we can stay on the cutting edge (3D in your browser!?) and is going to be an older, darker, more serious (sorta) game aimed at players who have been craving a game like that. Naturally, announcing this via a sock puppet show makes NO SENSE AT ALL... which seems exactly like something we would do. You are probably the only person who "gets us."