Hello all! Over the last few weeks, we've had a number of people asking about the progress on the server rewrite. Not sure what that is? Skip to the middle of this post. For those of you who have been with us for a while, here's where things stand. 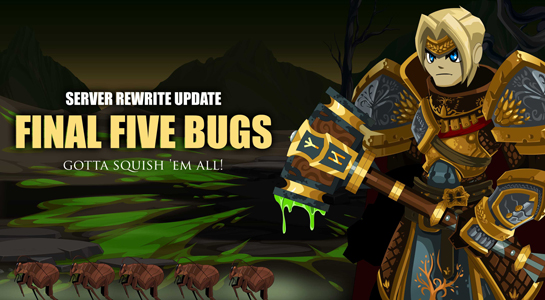 What's a Server Rewrite, and why are you doing it?

Goood question! We have a good deal of control over the game, but currently we are using server software whose base we did not build ourselves (though we created all of our server-based game functionality)... and that means there are some things we cannot change.

If you want to get a sneak preview of what's coming in the server rewrite or help us test on the PTR server, you can help support AQW's continuing development by upgrading your account. We make our games for and with you, which is why you should also tell us what you'd like to see next in our Suggestions board!

So... When will it release?

As soon as it's ready! We've given several estimates for the final "release date" as the project's gone on, and each time we do, some crazy, insane, "should not be possible" bug rears is ugly head. So I'm not going to do that this time!

Yorumi's down to the final five bugs:

Keep an eye on the Design Notes for future progress updates, and keep an eye out for more updates here in the near future.