Thanks to all your support, we have been able to upgrade ALL of our servers! Some of them were several years old and had MANY battle-scars after years of heroes, monsters, bugs, and brawls.

Because we are running newer, faster server hardware (the server "box") and had made some additional improvements, we are able to combine servers. That is GOOD, because it means those servers can hold more players with less lag, which means more heroes for you to quest with!

It also means that we lost several server names off our list, like Safiria, Minimal, Talim, Truffle, Samba, and, of course, good ol' Test4. :_: 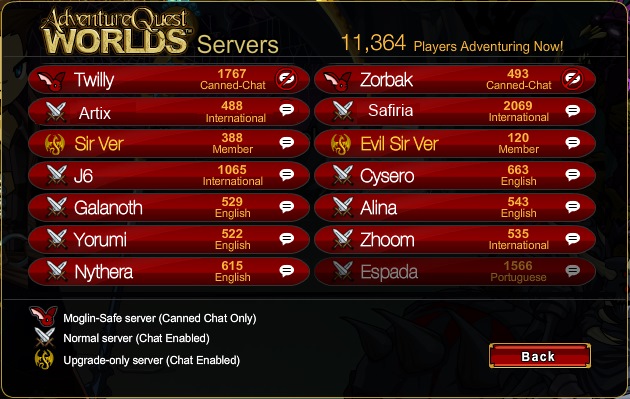 We know many of you have "home servers" you are loyal to, where you build communities and battle alongside your friends. Because of Safiria server's loooooooooong history (that server name goes back to 2008, and was the first open chat server!) and the legions of players requesting her return, I asked Captain Rhubarb to make the following change to our server lineup.

To commemorate all the other home servers which have been retired, we are going to make "Home Server" plaques for you to display in your houses. Those will come soon.

Thank you all for your continual support! Without heroes like you, we could not continue to upgrade and update AQWorlds!