This Weekend: Elements of Change

Seasons change from spring to summer, fall to winter. Stars fade, and children grow. For almost 15 years, we’ve watched Aria blossom into a remarkable young girl. But nothing stays the same forever. This weekend, the time has come for her and the Darkblood race to branch out. Aria's ready to make her mark on the world... you and Eremon just need to find her first! 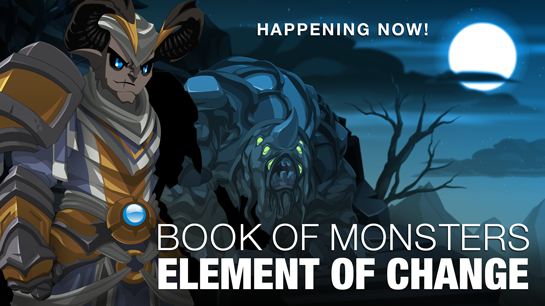 RIGHT NOW, log in and battle alongside Eremon, leader of the band of Darkblood Pilgrims, as you attempt to rescue the kidnapped Aria AND search for any sign of his goddess, Kolyaban, first daughter of the Queen of Monsters!

Find the Darkblood LoreKeeper armor in the Rep shop and 6 new monster and boss drops as you battle the creatures in the /twistedcavern!

Oh. And we don't want to spoil anything for you but... OMG YOU GUYS, a THING HAPPENED! When you hit the big surprise, tweet me your reaction!