Get the Jurassic Raptor Rider Gear in our new Limited Time Shop!

You don't need to be a master scientist or a tourist in a crazy-dangerous dinosaur-themed park to take a ride on a raptor... at least, not in AQWorlds! A ton of us here at Artix Entertainment love dinosaurs and the Jurassic Park movies, so it just made sense to share that love with you guys, and there is nothing cooler than slaying monsters from the back of a raptor! 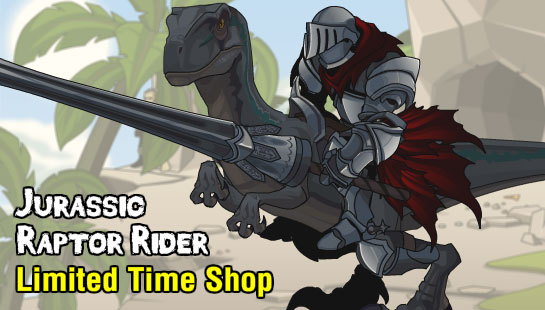 Laken's used all his genetically-engineered skill to create the Jurassic Raptor Rider for you all. Tonight's shop will be available until next Friday and includes:

Each of the items in the Jurassic Raptor Rider LTS can be bought with AdventureCoins... and until July 10th, you can get up to 40% more free AdventureCoins depending on the package you buy!

PS: A few items are leaving game on Monday, so get them while you still can! The Seekers of Chaos and Shadow Warrior Blade+5