The traveling sales moglin, Quibble Coinbiter, has returned to Battleon with an all new assortment of rare items (most of which he is willing to part with in exchange for AdventureCoins) which are magically themed, in honor of the new magical Arcangrove area. 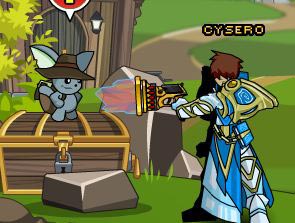 In an AQWorlds first, Quibble will be staying in Battleon for a little longer than usual and next week he will be ADDING special items in honor of Talk Like A Pirate Day (including the all new Icy Naval Commander armor!).

A lot of you have been asking for new rep dialy quests to help you earn Arcangrove reputation a little faster and we have answered your call. Speak to Ewa in The Cloister and Paddylump in the Mudluk Village to take on their new reputation daily quests!

Remember, we are only halfway through the Arcangrove saga, with lot of areas (and lots of new rep items... and maybe even a class) to come!

Dage The Evil (of one AQW's amazingly talented artists and J6's personal minion) has further expanded his shop and added new quests to obtain some of the blackest, most wicked armor and weapons availible in game! 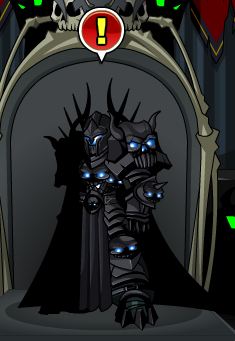 If this sounds like it might echo the darkness in your own soul, speak to Dage and see what he can arrange. If you need help finding him, be sure to ask some of your fellow players.

Now that we have fully recovered from DragonCon (except for Llussion who had to go to the doctor today and hasn't been in all week) we will be continuing the Arcangrove Saga, as well as beginning plans for AQW's third birthday in October.

Just letting you guys know, we WILL be offering 2nd Upholder status (much like we offered 1st Upholder a year ago, and Founder a year before that) with a special badge, rare item, bragging rights and all the benefits that come with being a 2nd Upholder!