The Insane Pyromancer Returns to AQW!

One of the AE Community's favorite villains returns to AQW this week. XAN is back! 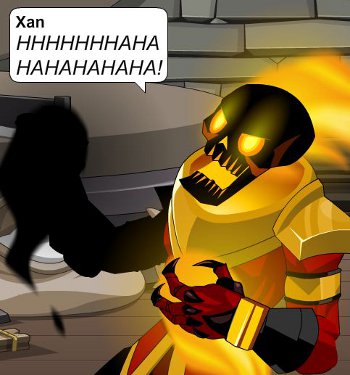 If you have never played Dragonfable then you might not know who this guy is. I suggest you talk to Warlic at the top of the volcano map. He can fill you in on some backstory.

If you missed out on the first Xan release then you will need to make your way to the top of the volcano before continuing into the town of Basani which Xan has attacked.

The parents of Basani have been separated from their children and now their burning town swarming with fire monsters and the insane pyromancer himself separate them from each other.

You will need to take a little extra care in Basani as the monsters will attack you on sight! Be prepared to rest between spawns before you get to face Xan himself. 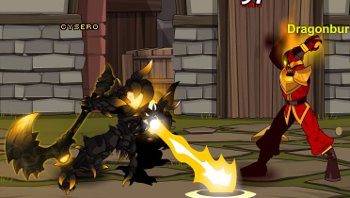 You will be able to get the same monster drops from the Volcano or farm Xan for a bunch of brand new Member and non-member gear, such as the Molten Dragon Set!

It's been a while since we've seen Xan but hopefully we won't wait so long next time before we continue his story.

Daylight Savings Time is coming up on Sunday. That is when we (well, some of us) turn our clocks ahead one hour (and lose an hour of sleep). To celebrate we will be having a Limited Time Shop (Button in Battleon) where you will be able to get some really nice spring themed rares all crafted by Solrac! SPRING into action before the clock counts down to 0!

It's been so long since we have added new treasure chest items so we've added a few this week and we will try to find the time to add more in coming weeks! This week you can expect to find these new items: 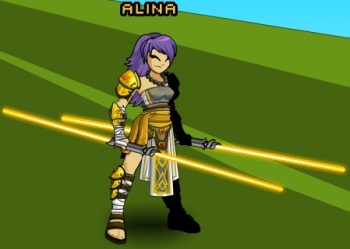 Remember, you can get more Treasure Chest Keys from Twilly in Battleon, or just sell the unopened chests for a little extra gold if you don't want to see what is inside!

Following close on the heels of Dage's Birthday Shop, Dage has decided to update his Legion Shop in Shadowfall with new items!

And speaking of Dage's Birthday Shop we have a LOT of Legionaries who are saying that they would like to see Dage stay in Battleon and celebrate his deathday for a little while longer so we've extended the shop just for you. It will be here until next Friday unless there is another round of demands to extend it. That is one long birthday party!

The semi-disastrous I CAN HAS MOD contest has now begun its last round. You can pick up the Last Cheezburger Deluxe from Cleric Joy in Battleon to get 1 CHANCE to win but remember that you get 1 EXTRA CHANCE to win for every month of Membership you have left on your account at the time of the drawing and 1 EXTRA CHANCE for every AExtra that you complete.

The drawing will be held on March 30th. We will then try to contact the winner and get their wish. Make sure that your AQW e-mail is an ACTIVE one that you check often. Or at least on the 31st.

Our last winner did unlock a new WISH RULE (by wishing for another class) so I'll list the updated rules...

#2: In the event that a wish will break fundamental game play, upset a player or group of players, or in any way result in problems or complications for the staff or game... a Genie Lawyer will be summoned from the forbidden plane of litigious wishes. If the wish was made with good intentions, the Genie will begin to negotiate a wish that will benefit the wish maker. If the wish was made out of spite, hate, greed or bad intentions, the Genie is allowed to use their powers of “wish legalese” to re-interpret the wish. If the genie is “unclear” on a certain part of the wish… even if it makes perfect sense to everyone else, the Genie is allowed to ask random players online questions and replace parts of the original wish with their answer.

#3: Any wish for an item will turn ALL Golden Cheezburgers in the game into the item that was wished for.

#5: If a wish is made for something that does not exist, it will be created as long as it is original. If it is a selfless wish, it will be created with love and care. If it is a greedy or hurtful wish, another randomly selected player will be chosen to make a counter wish, which may produce unexpected and unfortunately results upon the original wisher.

#9: Any wish that requires a lot of coding and might break the AQW programming team or make said team cry (i.e. Class, Entire Zone, All New Functionality) can only be wished for once per calendar year. Once that item has been wished for another items in this category cannot be wished for again until one year from the granting of the previous wish as elapsed.

Remember that each of these rules can only be unlocked by people using wishes that attempt to break that unseen rule.

Once again, the reason that we're closing the contest down is that the last wish met with an insane amount of complaints even before the wish came out about receiving several completely free gifts. It's building unrealistic expectations, seems to bring out the worst in the community and takes up a lot of our time and resources. It's simply not worth running it again after this.

The contest may arise again in some other form with new limitations and restrictions, but then again it may not.

To those of you who have kept a positive attitude, thank you. We have been REALLY lucky so far and gotten several kind, selfless and very thoughtful winners and I can only hope that this last one is just as great as the others have been.

287 days until Just Another Day