Now that you've gained control of the Portal, we are going to need ALL players to work together to cleanse the ChaosWeavers from this vast underground city! As the saying goes, fight fire with fire. But you should also fight SPIDERS with fire! 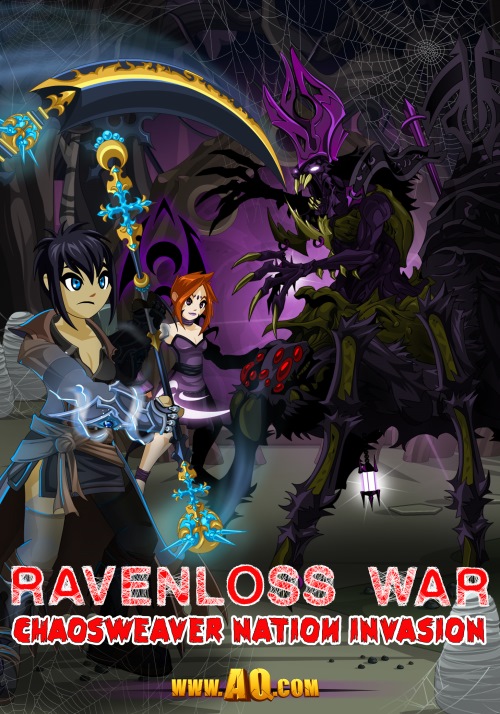 Ready to burn it all down? Pyromancers are powerful magi who specialize in the elemental magic of fire. If you /join volcano and complete Xan's storyline, you can even start down the path to training as a Pyromancer yourself! (Earn the non-member Pyromancer Class by farming Shurpu Tokens or purchase it from the Class shop in Battleon for AdventureCoins.) 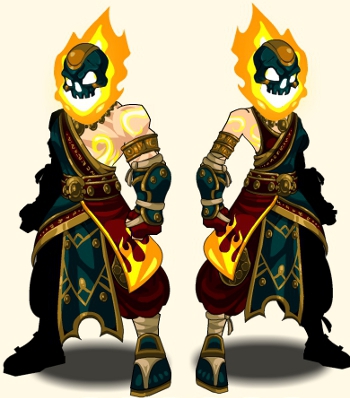 Here's everything that you will find in the Pyromancer Shop.

For those who want some options on how your pyromancer (or any other class) appears there are some armor set options too.

And for those of you who are fans of Xan, the Insane Pyromancer himself, we have added something for you! 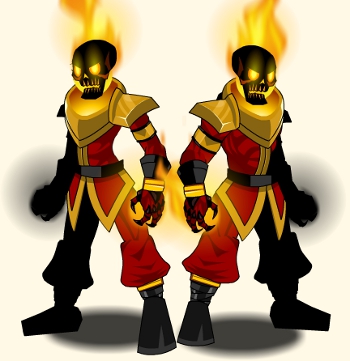 What is a Shurpu Blaze Token and How Will I Get Them?

LEGENDS: You will only be able to do ONE of the quests per day. MAKE SURE YOU DO THE LEGEND VERSION!

As always there will be an AC version of the class in both the Shurpu Library Shop and in Ragnar the class dealer in Battleon for those who don't have the time to invest in earning the class for free.

Now, let's see what the class can do.

Most mages learn ways to use their arcane arts to control all of the elements to some degree or another but some magi decide to focus their studies in a certain area of the magical arts. For some like Alina and Reens it is in the crafting of potions and magical mixtures, for some like Cysero it's the forging and creation of magical weapons, armor and constructs. But for some it is mastery of a particular element.

Pyromancers (as the name would imply) delve into the deep mysteries behind fire. They study the way that fire both gives warmth, light and life as well as the way it consumes and destroys... but some lose their will to the flame and the magical fires consume their mind and sanity.

As this is a caster based class I suggest Wizard Enhancements but you might try your luck with LUCK since the damage potential in this class is pretty high and your crits will be extra nasty. It's built on the Mage mana regen model which gets mana on hitting a target and criting as well.

This class is a single target / farming class with only one defense trick but it's a good one.

Scorches your foe for light damage. Also applies Scorch for Damage over Time.

Light, fast damage with low mana cost and a quick cooldown. The really important thing to pay attention to here is the 6 second DoT, Scorch because every other attack DOUBLES ITS DAMAGE when Scorch is applied to your target. It means if you are farming you will need to juggle putting scorch on multiple enemies since its duration is so short.

Something else I should mention here: every non-passive ability in this class has its own battle effect on screen. FLAMES EVERYWHERE! 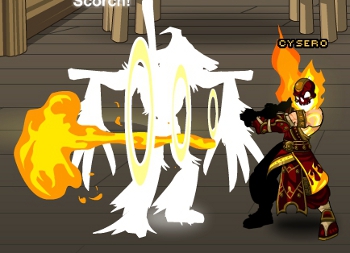 A blast of flame leaps from your hands burning multiple enemies around you, also causes a burn effect for damage over time and reduces enemy damage for a short time. Damage increased on enemies with Scorch applied.

This is your only AoE skill, but the cooldown isn't too long, it's not terribly costly considering the cooldown length AND it hits all foes with a damage debuff so they all attack back for less. Even in a single target situation this is a really nice skill as long as you have Scorch doubling the damage to your target.

Surround yourself in a magic shield of fire. Reduces incoming damage, heals for a small amount and any enemy who strikes you takes damage. Damage increased on enemies with Scorch applied.

This is my new favorite skill. Yorumi really put a lot into making this thing just exactly the way we thought it should be during the concept stages. As soon as you cast, you get a decent chunk of HP back. For 6 seconds, you significantly reduce all incoming damage and for that 6 seconds any monster who hits you will have their damage reflected back at them for roughly the same amount as they would have done to you with a soft cap of 1000 damage (meaning the monster can crit on themselves and Scorch can double that value).

This one will be extra fun in PvP as it will remain in effect even if you are stunned or petrified *wink nudge* and the damage will pretty much cut through any kind of defense.

"Oh, what's that Mister Glacial Warlord? You just took 90% of your OWN life away while I just stood there? Gee, sorry about that."

Since this is specialized damage, the damage numbers will appear as DoT orange numbers rather than white attack numbers. Here's my favorite part... Yorumi found a way to alter the way that skills function JUST to make this AWESOME skill animation continue to loop as long as your Burning Ward is active.

HEAT OF THE KNIGHT & MELT FACES

Increased survivability and damage, but as it is a non-member class you only get 10% of either.

A massive fireball flies at your target exploding for HIGH damage, also also causing a burn effect for damage over time. Damage increased on enemies with Scorch applied

BIG BADABOOM! This is like a souped up version of the mage's basic fireball skill but MUCH LARGER in every respect. This is your nuke, literally. and the damage is still DOUBLED if you have your old pal scorch applied.

Oh, that little 833 you see in the image. That's not a crit, its WITHOUT scorch applied and it's BEFORE we raised the damage on the skill in balancing.

BURN AT BOTH ENDS

Occasionally, your Haste and Mana Regen will GREATLY increase for a short time.

With so much damage potential it seemed a little silly to make the rank 10 passive another nuke, so instead it will nearly quadruple your haste and mana regen for a short while letting you blast your enemies to cinders with a super-fast barrage of flame skills!

There you have it. Pyromancer does not take a genius to play but as with many of our skills you will get a lot more out of it if you put a little thought into how to use your skills to your advantage rather than just button mashing. Now that that's been said... let's LIGHT EM' UP!

Rolith says,"You need a Pyromancer-only quest for Ravenloss called 'Kill it with Fire'" I say we need that AND class-specific quests for Arachnomancer, Blademaster, and other classes, too! Equip specific classes and complete themed quests to earn extra (larger) amounts of Ravenloss rep! 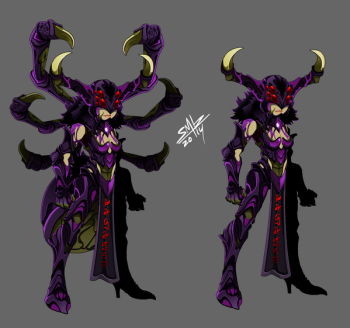