The convention is only 2 days away!

It is madness here at the lab. Cysero and the team are getting a brand new release ready for you in AQWorlds on Friday. Meanwhile, Nythera, Thyon, Miko, Faith and I are preparing to run our first ever booth at the Metrocon Convention. We created a giant 9 foot wide banner to hang behind the booth and another 9 foot wide one to go in front.  We have a few never before seen things that we will be releasing at the convention... like our first music CD! 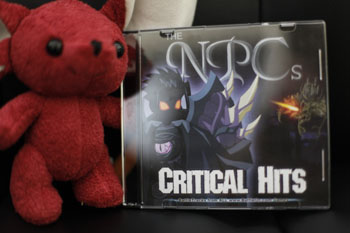 Our first music album is called The NPCs - "Critical Hits". It features 32 tracks of music from ALL of our web based games... and a bonus track of Zhoom's never before heard themesong, "I don't like dem Ninjas." EbilCorp ninjas best go to Yulgar's for some ear plugs. The CD sounds amazing and there are some songs on it that I did not even know we had in game!

Just a reminder - Target Stores are offering 10% off our in-store Game Cards until the end of the month. You can use any of our game cards, even the ones that just say for AdventureQuest and DragonFable, for ANY of our games.  You can even stack up cards to get larger packages by using the Master Account System.

It does not cost anything to make someone smile. I think it is contagious when people do good deeds. Especially they do them for no reason at all. So please join me in a quest today to do an act of random kindness. Help a stranger with a problem, give someone a compliment or words of encouragement, do an unexpected chore at the house just so someone else does not need to, or even politely answer a question from someone who is frazzled. When you complete this quest... keep it a secret. The reward is a feeling deep within your heart that will have no equal.

Thank you for reminding me that we have a Friday the 13th coming up next month! I want to do something bigger and crazier than we have ever done before! Bigger than a box of herios breakfast cereal!

Forum Question: Any ideas? Maybe an un-Friday the 13th?