Behind the Scenes Updates

7:15pm All servers now have the event live! BATTLE ON! (unless you are currently in the mirror world in which case... BATTLE OFF!)
7:15pm 7 of 13 servers running the event. Our network is overloaded. This is temporary as the first wave of players gets the new maps.
7:00pm The Event is going live!
6:00pm Servers back online! Pre-event has begun. Time to hang out with Paul & Storm and.... OMG!!!!!!!!!!!!!!!!!!
5:50pm Servers restarting. Rare shop, increased inventory, and Paul and Storm pre-release area going live!
5:40pm Rolling the files to the live servers.. preparing to restart!
5:10pm Just a reminder - The level cap raise to 35 will be happening on 10-10-10 (AQWorlds official birthday) to prevent additional lag tonight. However, inventory space will be increasing when the servers restart for the event.
5:05pm Paul & Storm are logging in!
5:00pm Drastic action! We have decided, in order to overcome the bug... we are going to load the Mirror Realm map files off of our servers. Cross you fingers!
4:45pm Meanwhile... Faith has just left the lab to ship the first 60 HeroMart packages! (*whispers* Read yesterday's design notes post*)
4:30pm We will be launching in just..... oooooooh wait. There it is. Zhoom just notified us of a major bug with the CDN thingy. (No event would be complete without one of these last minute stomach-butterflying problems) We are rushing to fix it as fast as possible!
3:30pm I made a half-pony half-monkey monster for you using duct tape and rope bio-technology! Cysero & Beleen say I am not allowed to touch flash any more. Something about "If you tied a bird to a show box would you call it an airplane?" Not long until we start rolling the files to the production servers. 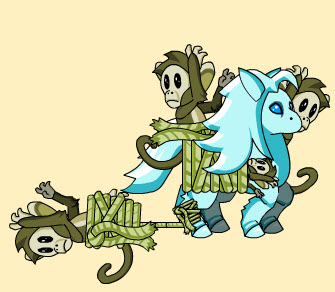 3:00pm Adding items to the shop, preparing pre-launch version of town (aka The Waiting Area) where Paul & Storm will join us live as we wait for the event to begin :-)
2:45pm Things are going spookily ahead of schedule. Maybe we will have time to make a half-pony, half-monkey monster to please you.... *singing* but I get the feeling that... oh no, I have a feeling you will like it. Final testing is in progress.
2:11pm Every item in tonight's special event (except one multigame-epic item for obvious reasons)  is going to go perma rare. Only a few hours left until it begins!
1:45pm Unrelated to this release... Lim is here at the lab recording voice acting for the upcoming FalconReach Idle with George Lowe in DragonFable.
1:30pm Yikes.... we just realized that we forgot to make a female version of the most highly anticipated armor of the release and are rushing to build it. Of course... by we I mean them, because they will not tell me what it is because they know I will tell you.
1:00pm We should put a warning label on all horses and carts in the Mirror Realm that says "Objects in the Mirror Realm are closer than they appear."
12:45pm Just realized that we have different versions of the homepage for different countries and I was only updating the Play by Play on one of them! Moved the play by play here so you can see what is happening behind the scenes. Storm's in-game character is now setup and... Pizza has arrived!
12:00pm Only a few hours left until the release! The servers are holding good... but all of the toliets in Secret Underground Lab #1 just broke O_O.
11:30am For tonight's release we are moving ALL of the big files onto a globally distributed content delivery network (a CDN.
11:15am The 1st HeroMart Orders are being packaged to ship today!!!!!!!! "But the HeroMart page says that it is not coming until Wednesday?", you say? *whispers* This is a strong indicator that you did not read yesterday's design notes
11:00am Paul's in-game character is setup.
10:40am Contacting Paul & Storm to make sure they are ready for tonight :-)
10:35am Beleen, "Rep.... " Special Note: Beleen is at the Dentist's office across the street.
10:30am Cysero, "Reporting for.... let's break some stuff!"
10:08am Powering up the Javatron 2000. Using Thyton's secret recipe to make some "Braddock Steel" The secret is to grind the beans until they are nearly one atom large each. Then each sip has the potential of causing an atomic explosion of caffine.
10:02am Artix,"Reporting for duty!"
9:55am Zhoom, "Reporting for duty!"