I've really got to hand it to Brazil, they know how to pull our strings. Lots of people have asked to have things put in the game, everything from adding their personal armors to adding flags for their country, but we have never seen such an amazingly polite, calm and organized movement from so many of our players.

You may not know this but Brazil is in one of the top 5 countires that play AQW. We have so many Brazilian plyers that I've considered trying to learn Portuguese (the official language of Brazil) just so I could talk to them in their own language!

I'm not sure which players started it but we have gotten phone calls, letters, tweets, and every other communication possible asking that we recognize Brazil in the game.

I don't want to give you the wrong idea. This wasn't spam. We weren't being harrassed (like the Green Star Sword fiasco). These were simple polite requests coming from literally thousands of individual Brazilian AQW players.

Today is Brazilian Independence day and we decided to say obridago Brasil (Thanks, Brazil!) By adding the Obrigado Brasil shop to Battleon with a sword, set of daggers and horned helm inspired by the national colors and standard of that country. 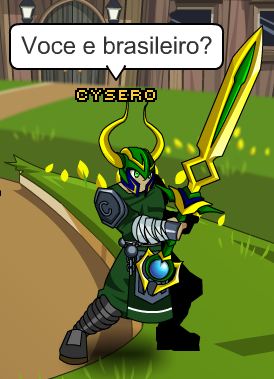 Thanks for being polite, calm, and reasonable about the request to honor your great country. Above all, thank you for supporting AQW!

This shop will only last until next MONDAY so get these items while you can.

Dragoncon is over. WE SURVIVED!

We returned from con yesterday with more stories, adventures and swag than we know what to do with. Allow me to say thanks to all the wonderful players who made it out to see us from all over the USA and the world! We hope you had a good time, cause we did.

As you know we give away a free non-member pet to everyone who finds us at con and attends our panel. This year we took suggestions from the panel itself for the ultra rare Dragoncon pet and the concept that won was an exploding Streampunk Dragon. J6 is working on that right now and we should be hand delivering them today or tomorrow.

During the drive up and drive back, I stole an idea from Weird Al's Twitter. Everytime we stopped for gas, to eat, bathroom breaks, or just to stretch our legs, Artix and I found a pay phone and tweeted the number out so we could talk to those of you who noticed.

We had SO much fun talking to our friends who managed to call in the 10 minute windows that we were able to talk. It made the 8 hour trek up and down a lot more bearable for us. Thanks!

We hope to do that again next year!

We're all still recovering from over stimulation and lack of sleep so it might take us a few days to tell all of our stories and get this year's Zorbak (And Twilly this year) Goes To Con pics up.

Quibble asked me to tell you guys that he will be stopping back in Battleon THIS FRIDAY with a host of new magic themed items and rares, to help you make your way through the new Arcangrove zone.