Apparently, No, You Can't Has Mod

Our first winner was given a full week to respond to the e-mail that we sent them and I'm sorry to say that they have missed out. I think a week is a very reasonable amount of time to give someone to respond but a lot of you want to get this show on the road and so do we.

We have sent a NEW e-mail to the NEW winner, so be sure to check the e-mail that you have attached to your account. If you, for some reason, can no longer access that e-mail then contact your e-mail provider and try to get access again.

Again, contact your E-MAIL provider. Player Support can't help you get your e-mail back. Nythera and her crew have many wonderful powers but all of them are related to AE's games and go no further into the real world.

We will be giving this new winner 3 full days to respond. Winner, if you have not responded by Thursday at NOON (server time) then we will pick again. Good luck, and hurry up! Everyone is waiting on you!

Over the weekend we saw a lot of chatter about the new legion quests. TO ME it seemed pretty even, half of you were complaining that the quests were too easy and half were complaining that they were too hard. That usually indicates that we did well but Dage was unhappy with how easy these new quests seemed to be and they are his quests so he can make them as hard as he likes.

Today there will be some changes to the new quests. First, the Legion Soul Collector will be raised in price to 150 Legion Tokens. Second, each of the subsequent quests will require 50 souls instead of 25. To those of you who got it before the changes went through, well done. It takes a keen eye to appreciate a bargain when you see it.

Big MEMBER week this week. Wednesday will have another Mid-Week release for members which will add a little more story to the Bludrut map plus some nice new member rewards. Friday will see the next installment of the SKYGUARD storyline as well as the premier of the Member-Only Grenadier class!

MANY of you Members have already reached rank 10 in Skyguard and have been waiting for this class for a long time. You will all get a head start on this awesome new class as you will only be able to get it with reputation starting this Friday (Feb 24th).

Next Friday (Mar 3rd) an AC version of the class (Which will also require Membership) will show up Itzachi but by then the hard-grinding Rep hunters will already have mastered the class all the way to rank 10. I know that some of you will take issue with the class not being rep only but we are doing this because a LOT of people like taking the AC shortcut and it doesn't seem right offering the time-saving shortcut to non-members but not for Member classes. Any ways to save time and/or labor should always be available to Members.

Those of you who wish to earn it without spending a single AC will, of course, always be able to take the path of hard work. Any additional items to the set (helms, weapons etc) will also be in the Skyguard Rep shop for Rank 10 and you will ONLY be able to get them through hard work.

I will be doing a class skills breakdown a little later this week.

In case you didn't notice, we have a new shirt in HeroMart for fans of Classic AQ! 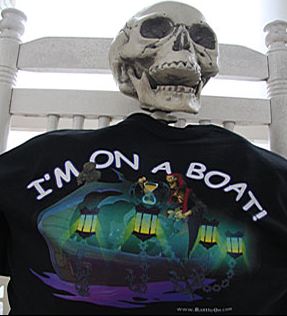 The "I'M ON A BOAT" shirt features AQ Classic's Death on his gondola welcoming you to the underworld. It also comes with the VERY LARGE Death's Reaver scythe for your AQ Classic character!

We are running out of stock of MOD packs for the Battleon Battle Card game and we still have some  2012 Calendars but none of these items will last forever and once they are gone, we don't plan on reprinting them.

You may or may not be a calendar person but I can't tell you how much I love having my mods packs as a part of my card game.

Quibble and the Event Rare Shop for Love's Curse will be leaving a little later today! Just throwing that out there.

This year is a Leap year which means that this month gets a 29th day this year (as it does every 4th year). It's a little late to do an entire event for Leap Day but what would you like to see happen on Leap Day? We might take one of your ideas and run with it.

305 days until Just Another Day